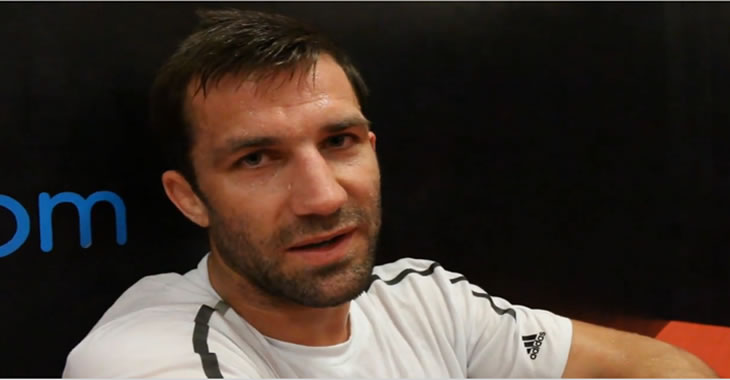 For awhile there, it looked as though it could be some time before we saw former middleweight champion Luke Rockhold back in the UFC’s Octagon. He’d expressed some serious disappointment with the money the UFC was offering him, and seemed to be focused on his burgeoning modelling career.

Luckily, however, the UFC has found a way to lure Rockhold back to the cage. Yesterday, it was announced that the former champion will be taking a trip to Melbourne, Australia this November 26, where he’ll take on an old foe in Brazil’s Ronaldo “Jacare” Souza.

Rockhold and Jacare first met in September of 2011, under the Strikeforce banner. On that night, the American stole a competitive, five-round decision from his Brazilian foe, earning the Strikeforce middleweight crown in the process.

In the hours after this rematch was announced, Rockhold took to Twitter to give his thoughts on the booking.

“Time to go gator hunting in Melbourne,” Rockhold said, having some fun with the nickname Jacare, which means alligator in Portuguese. “Round 6 coming soon.”

When we last saw Rockhold in action, he was knocked out by an opportunistic Michael Bisping in the main event of UFC 199. This loss, which will go down as one of the year’s biggest upsets, marked the end of Rockhold’s brief reign as UFC middleweight champion.

Jacare, meanwhile, was last seen in May, when he flattened an aging Vitor Belfort to rebound from a controversial loss to streaking Cuban contender Yoel Romero.

The winner of Rockhold and Jacare’s Down Under rematch could well receive the next UFC middleweight title shot. However, a case could also be made for the winner of Chris Weidman and Yoel Romero’s long-rumored bout, which is believed to in the works for UFC 205 this November 12 in New York City.

The most important thing, however, is that Rockhold is heading back to the cage. Though his modelling career appears to be taking off, his days as a fighter are not yet done. Considering he’s one of the game’s very best competitors, that’s good news.

Who do you think wins Rockhold and Jacare’s middleweight rematch? Sound off, PENN nation!