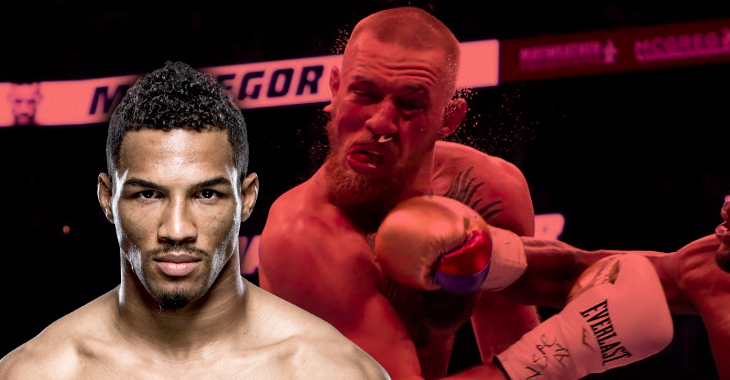 If there’s a topic, you can bet that top UFC lightweight contender, Kevin Lee will most likely have an opinion on it.

The young and outspoken 16-3 155-pounder has made his goals quite evident since entering the world’s premier MMA organization: win the title to become a world champion.

Lee had his first opportunity at gold in his last bout which took place in October when he and Tony Ferguson competed for the interim championship. Lee would find success early on as he battled through a staph infection but would be forced to submit to a triangle in the third round.

With a win, Lee was hopeful to go on to face the then undisputed champion, Conor McGregor.

McGregor, who was just stripped of his title this past Saturday after Khabib Nurmagomedov defeated Al Iaquinta in the main event of UFC 223, still had to make his presence felt during fight week despite not being apart of the action at any point.

Lee shared his thoughts on the incident when speaking to MMAJunkie today:

“I think you do have to blame some of the media for blowing the dude’s head up, and he just feel like his shit don’t stink. I think a lot of what you see is frustration. I think he knows he ain’t been the champ for a while. He don’t know what else to do. He’s acting like a child. It’s retarded. I ain’t going to give that cokehead too much press.

That’s just the fight game. What Khabib did I didn’t feel was disrespectful. I didn’t see nothing out of line. And if it was out of line that’s not the way to go about it. I think Conor, he wants to be this gangster, he wants to be this thug, but he ain’t really from there. If it’s me, I got in this game to get away from that, to get away from having to do shit like it. It seems like he is trying to get there and then he’s going back to where I came from it. It’s backwards to me. It don’t really make sense.

You can tell the man don’t know what he’s doing, because when you have that type of money, you ain’t supposed to throw shit. You supposed to be out somewhere holding up a newspaper in front of cameras: ‘I ain’t nowhere near the scene. But somebody will get touched.’ That whole situation is laughable. It’s laughable to someone like me, and I hate giving it press really.”

A man that Lee has some history with, Michael Chiesa wound up a victim of the whole situation as he was there for a fight of his own on the upcoming Saturday. That was until McGregor and his crew rolled into the Barclay Center and he threw a dolly cart into the window of the bus that the fighters were inside of. Thus resulting in lacerations to Chiesa’s face from the glass that forced him out of his bout.

Despite their differences, Lee felt for his former opponent, Chiesa.

“I feel bad for the dude. I really do. I wish it had been me on that bus. We would have caused a riot in that *expletive*. There ain’t no way they would have held me on that bus. I feel bad for a guy like Mike. Mike don’t want to hurt a fly. He should stop showing up for media stuff. He just keep getting hit in the head. If I was the UFC, I would just stop scheduling the dude to do media. It ain’t working out too good for him.”

Lee’s next fight takes place in two weeks live from Atlantic City, New Jersey for UFC Fight Night 128 on April 21st when he takes on Edson Barboza in the night’s main event.