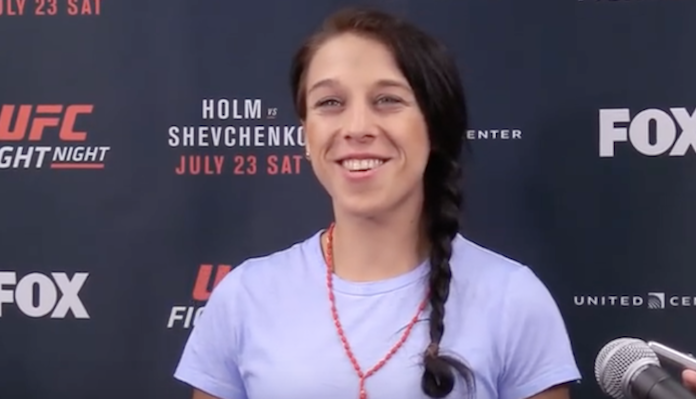 Back in November, dominating UFC strawweight champion Joanna Jedrzejczyk lost her title to Rose Namajunas, succumbing to first-round punches. Last weekend, in the co-main event of UFC 223, she failed to reclaim that title from Namajunas in an anticipated rematch, giving up a very close decision loss.

Now 0-2 against the champion Namajunas, Jedrzejczyk finds herself in a tough spot in the strawweight division. Luckily for her, a fresh start in the 125-pound flyweight division is just 10 pounds away.

Moving to flyweight is something Jedrzejczyk has discussed many times in the past, and apparently, it’s still something she’s considering.

“It would definitely be a more healthy solution,” Jedrzejczyk told MMANytt of a possible division switch. “After 15 years in the sport, my metabolism is wearing out… We have some limits – even though I think limits are only in our heads, time goes on. But I still feel young, my last camp was the best camp in my life.”

While Jedrzejczyk is open to a move to flyweight, it probably wouldn’t be permanent at this stage, as she still hopes to reclaim the strawweight title—whether its owned by Namajunas or somebody else.

“We will see, perhaps I will have one debut fight in flyweight, but getting strawweight belt is definitely still my goal,” she said. “Many people ask me about the trilogy, as I said, I don’t know. I don’t know if Rose will still be the champion. I still feel hunger to fight the best, to reach the highest trophies, as I felt for 15 years of my career. So it’s my intention to fight for the UFC belt again.”

“Will Rose remain champion? I don’t know, we will see. As we saw, she just defended her title for the first time,” she added. “Congratulations, our fight was excellent, and I’m really proud of that. We will see, perhaps we will have a trilogy.”

What do you think the future holds for Joanna Jedrzejczyk?