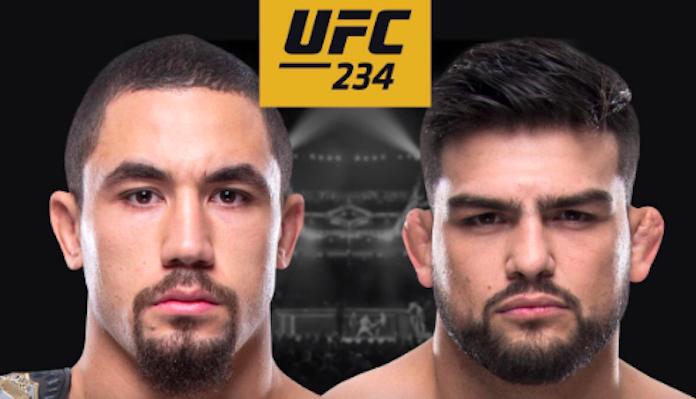 Earlier this month, ESPN reported that a middleweight title fight between reigning champ Robert Whittaker and surging contender Kelvin Gastelum was headed to UFC 234 on February 10 in Melbourne, Australia (February 9 in North America).

The promotion has now made this booking official.

This bout will be Whittaker’s first since a June war with Yoel Romero, which he won by split decision. While many fans consider this fight a successful title defense for Whittaker, it did not technically go down as a title fight as Romero missed weight for the bout.

In his next most recent bout, Whittaker captured the interim middleweight title with a decision win over Romero. He was then promoted to undisputed champion after Georges St-Pierre defeated Michael Bisping and vacated that title.

Kelvin Gastelum, meanwhile, last fought at UFC 224, when he picked up a split decision win over Jacare. In his next most recent fight, he delivered a violent first-round knockout of Michael Bisping. This win served to separate him from a submission loss to former champion Chris Weidman. Gastelum, a former welterweight just like Whittaker, is currently 15-3 in sum.

Ahead of their anticipated middleweight title fight, Robert Whittaker and Kelvin Gastelum have been serving as rival coaches on The Ultimate Fighter 28, where they have overseen a crop of heavyweight and women’s featherweight fighters.

Who do you think will win when Robert Whittaker and Kelvin Gastelum step into the cage at UFC 234 in February?