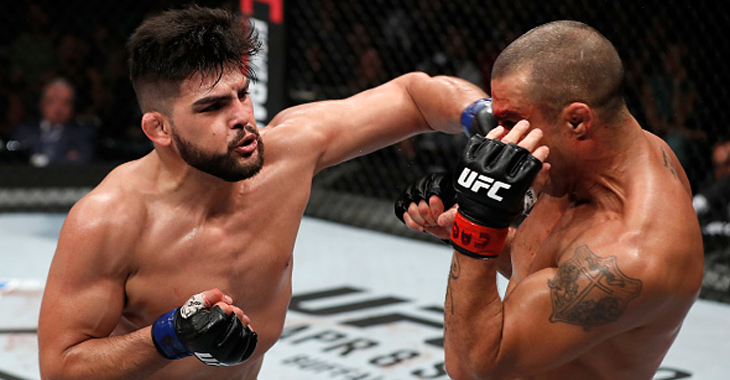 If things had gone according to plan, former welterweight contender Kelvin Gastelum would be gearing up for a UFC 212 middleweight bout with MMA legend Anderson Silva as you read this. Regrettably, the young fighter became the latest victim of the United States Anti-Doping Commission’s controversial anti-marijuana legislation, and was forced out of this planned contest when he tested positive for marijuana metabolites.

Apparently, however, things might not be as bleak for Gastelum as they initially seemed. According to the ever reliable Ariel Helwani, who spoke with Gastelum’s management at Dominance MMA, there is some cause for optimism regarding his current situation with USADA. Apparently, his anticipated return to the cage could come sooner than expected.

According to @KelvinGastelum's mgmt, @Dominance_MMA, things looking promising for him re: USADA issue. Return could be sooner than expected.

It’s unlikely, of course, that Gastelum is able to return to the cage in time for his originally planned bout with Anderson Silva, who is still without an opponent. That said, this is undeniably good news for fans of the surging middleweight contender.

When we last saw Gastelum in action, he thumped Vitor Belfort to a first-round TKO win. Prior to that Gastelum made a successful return to the middleweight division with an emphatic thrashing of the recently retired Tim Kennedy.

Gastelum’s recent success in the middleweight division was spurred on by a procession of disastrous cuts to welterweight, the most recent of which was so severe that he failed to step onto the canvas for a planned UFC 205 showdown with fan favorite Donald “Cowboy” Cerrone.

Outside of the wins mentioned above, other highlights of Gastelum’s career thus far include defeats of former welterweight champ Johny Hendricks, Nate Marquardt, Jake Ellenberger, Rick Story, and Uriah Hall. Currently ranked 8th at middleweight, Gastelum is the winner of season 17 of The Ultimate Fighter.

Who do you want to see Kelvin Gastelum fight in his return to the cage? Sound off, PENN Nation!