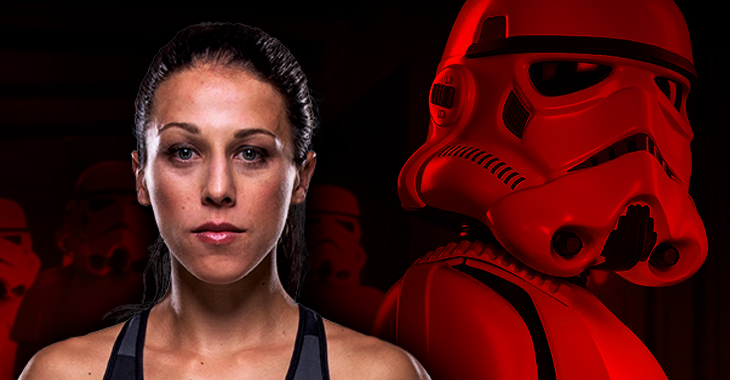 During the lead-up to her last fight, Joanna Jedrzejczyk was criticized by some about her mental warfare against Rose Namajunas. Since then, she’s vowed to come back stronger and better than ever, insisting she’ll even be more arrogant. We knew that Jedrzejczyk would come with her same cold demeanor, but we had no idea she had fully switched teams to the Dark Side. Watch out rebel scum, one of the best female fighters in this star system has just become a Stormtrooper.

We have no idea what this was for or if it was just for fun, but Joanna Jedrzejczyk teased this was after casting for Star Wars. She’s not the only fan of the franchise on the UFC roster. Ben Rothwell basically had an entire storyline for Star Wars mapped out, complete with a new evil villain. Georges St-Pierre even had to contribute to the excitement when the last Star Wars movie was released. So, regardless of which side she’s on, the former UFC strawweight champ is in good company.

“The villain that I created, that I would be, the first defining thing that’s different from all the other Sith is that he uses a black lightsaber. His control of dark energy is prominent because he uses the Force to control the length of his lightsaber, which is a huge advantage. I don’t think they explore the Force enough. You can do a lot of stuff. I can control dark energy and through that you’re talking about travel. When you start talking about how to get from point A to point B and how the universe works, you really understand the science of it, you start to understand the Force can do a lot of crazy things. Obviously, my character knows the knowledge of all of these things.” — Ben Rothwell speaking to FOX Sports.