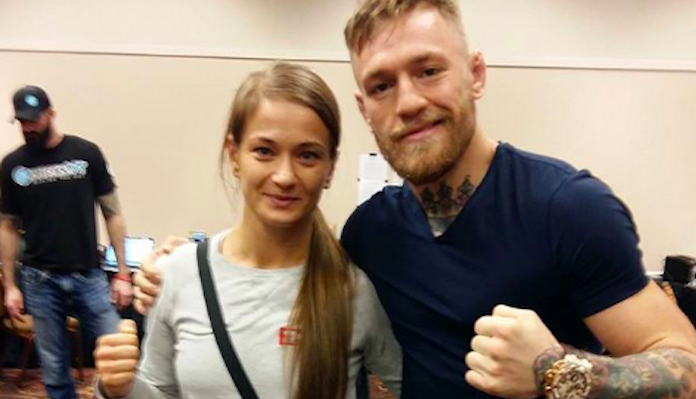 On Thursday afternoon, UFC lightweight star Conor McGregor showed up at the Barclay’s Center in Brooklyn, NY, and launched a ridiculous attack on a shuttle bus carrying a number of the fighters on the UFC 223 bill. The Irishman’s bizarre rampage crescendoed with him throwing a hand truck through the back-right window of the bus, causing injuries to two UFC 223 fighters, who were ultimately forced off the card as a result.

While many passengers on the bus were rightfully disturbed by McGregor’s assault, strawweight star Karolina Kowalkiewicz, who authored a dominant defeat of Felice Herrig on the UFC 223 undercard, was not. Why? Well, because she’s from Poland.

“I am from Poland,” she said in a post-fight interview, when asked if she was frightened during McGregor’s rampage (via MMAJunkie). “So I am OK.”

While Kowalkiewicz assured she wasn’t frightened by the Irishman’s frenzied attack, however, she certainly doesn’t condone it. In her opinion, he went too far.

“Conor, this time, went too far,” she said. “He crossed the line, because there were women in the bus like me and Rose [Namajunas].”

Kowalkiewicz’s nonchalant reaction to McGregor’s Thursday rampage is in stark contrast to the reactions of other passengers on the bus. UFC VP of Athlete Development Reed Harris, for example, admitted he thought he was going “to die” in a Tweet he has since deleted. While this Tweet was deleted, he reiterated that he believed he was in real danger in a series of subsequent Tweets.

Thank you for the concern. It was the scariest thing I’ve ever been through. Trapped in the bus while they are throwing hand trucks, chairs and even a bike rack through the windows

When the hand truck enemy threw window and hit Chiesa in the head and he started gushing blood. Yes. I thought we were in big trouble.

I’ve been in dozens of scuffles in UFC. Never once was I scared. This time was different.

Yes, contrary to Kowalkiewicz’s steely reaction, McGregor’s attack on the fighter bus was a disturbing experience for many of those involved. If anything, this a testament to just how tough the Polish fighter is—though there is no doubt about her toughness after her UFC 223 domination of Felice Herrig.

Who do you want to see Karolina Kowalkiewicz fight next?