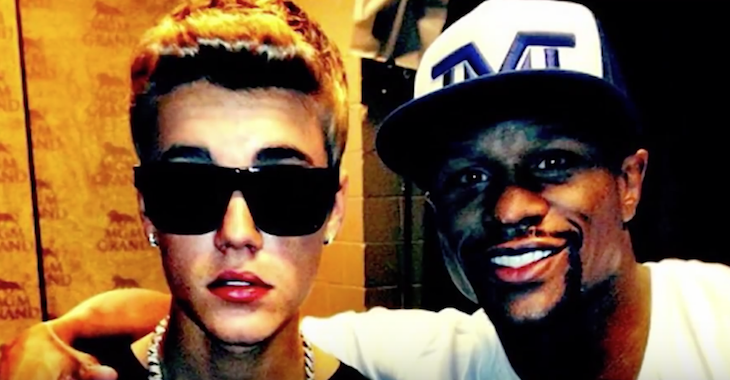 When you’re a world famous celebrity, public image is important. You’ve got to be careful who you associate with. It’s for this reason that pop superstar Justin Bieber has reportedly dialled back his friendship with boxing legend Floyd Mayweather Jr.

According to a report from TMZ, Bieber and his team, under the influence of a pastor at this church, were a little put off by Mayweather’s interest in strip clubs (the boxer owns a venue in Las Vegas called “Girl Collection”). They have decided to loosen ties with him as a result, just days ahead of his massive, boxing showdown with UFC lightweight champ Conor McGregor.

Apparently, Mayweather isn’t happy about this.

According to TMZ’s report, which cites an unnamed source in Mayweather’s camp, the boxer went “insane, nuclear” when he learned of Bieber’s decision. He now considers Bieber a “traitor”. Oh, the humanity…

Mayweather and Bieber have been close for some time. Bieber even walked the pugilist out to his 2015 blockbuster with Manny Pacquiao. It sounds like that’s all in the past now. Bieber recently gave his pick for Mayweather and McGregor’s massive August 26 showdown. While he picked Mayweather to win, he said he didn’t expect the boxer to knock the mixed martial artist out. Given his allegiance to team Mayweather, this initially came as a bit of a surprise. If he is indeed looking to distance himself from the controversial boxer, however, it makes a bit more sense.

“I don’t think so,” Bieber told TMZ when asked if he thought Mayweather would win by KO. ”I think it’ll be a good fight.”

What do you make of this drama between Floyd Mayweather and Justin Bieber? Do you think it will have any influence on Mayweather’s performance this Saturday? Join the conversation in the comments section.