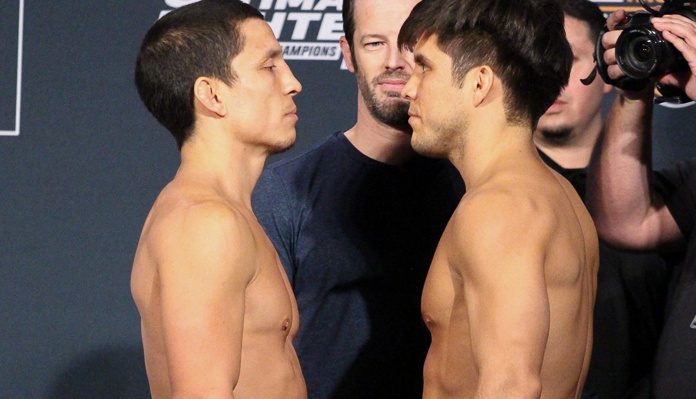 Moraes ultimately took home a controversial split decision victory. However, many members of the MMA community — including UFC boss Dana White — believed that Aldo should have taken home the W.

Aldo’s excellent performance didn’t go unnoticed by the division’s current champion, Henry Cejudo. “Triple C” hopped on social media to give “a public service announcement” directed at the “King of Rio” — which didn’t go over well with Benavidez.

This is a public service announcement from Triple C to the self proclaim “King of Rio”. @josealdojunior @danawhite @ufc pic.twitter.com/bkrLUcgyC0

Not long thereafter, the No. 1 ranked flyweight contender Benavidez ripped into Cejudo for overlooking his obligations to fight in the flyweight division.

It’s obvious you don’t want to fight me and have no interest of going back down to flyweight. Just stop stringing shit along with the company and the division. I’m ready to Fight! @danawhite @Mickmaynard2 https://t.co/3pVBGdDjOY

“It’s obvious you don’t want to fight me and have no interest of going back down to flyweight,” Benavidez said. “Just stop stringing shit along with the company and the division. I’m ready to Fight!”

Benavidez, a staple of Team Alpha Male in Sacramento, is riding a three-fight win streak, having last fought and beat Jussier Formiga by TKO in June 2019. He is also one of only two fighters to beat the current flyweight champ. The other is recent ONE Championship Grand Prix winner Demetrious Johnson.

Benavidez faced the Olympic wrestler Cejudo in The Ultimate Fighter finale in 2016. The closely contested fight finished after three rounds and Benavidez took the win by split-decision. Cejudo hasn’t lost a fight since their 2016 bout, but is yet to face Benavidez in a rematch.

“I beat him and that’s how I’m always looking at him,” Benavidez told MMA Fighting recently. “I’m better than him, I beat him, I pushed a pace on him and landed clean this clean that. I look at that so it’s motivating to see him do everything he can because that’s what I know of him.”

Would you like to see Henry Cejudo face Joseph Benavidez in a rematch for the flyweight title?