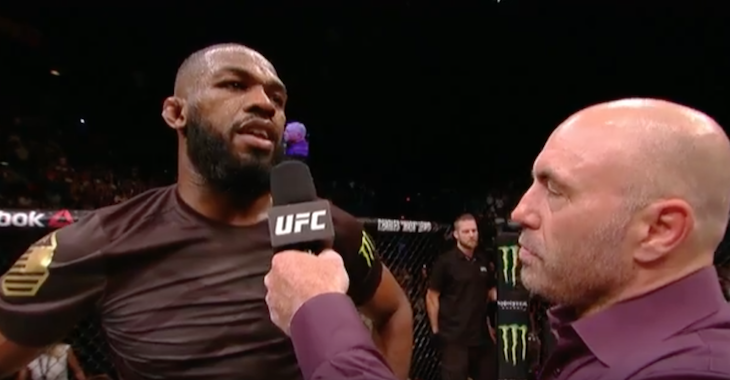 Prior to Jon Jones’ triumphant return to the Octagon this past Saturday in the main event of UFC 214, it was revealed that Jones and UFC President Dana White hadn’t talked since UFC 200, when Jones was pulled from the card for a potential USADA anti-doping violation just 48 hours before the fight was scheduled to take place. UFC President Dana White was understandably frustrated with the situation, and the rift between Jon Jones and Dana White grew.

As previously stated, ahead of UFC 214, the rift continued to grow, as White stated that he hadn’t spoken to Jones since the incident. On the heels of the fight however, Jones’ manager, Malki Kawa spoke on The MMA Hour to discuss the rift between Jones & White, and why he isn’t overly worried about it, saying: “All of that will get resolved in time,”

“I actually sat down with Dana after the fight and dealt with Demetrious Johnson. It’s slowly taking shape as well there and that (Jones) will be taken care of also.”

“I’ll tell you one thing about Jon, the way he runs his business and the way he operates — nobody can make him do anything that he doesn’t want to do,” he said.

“That (UFC not pushing Jones) won’t happen. You see what he did after the fight, he called out Brock Lesnar and he probably has a lot of hurdles (to get over) before he can make this happen.

“(Jon) let (UFC) know that this is what I want to do next. Hopefully, they will get onto that and try to make it happen.”

“It will all be resolved. It’s not as bad as it seems. Obviously, he went through a lot, and we expected some stuff from Dana,”

In mentioning Demetrious Johnson, Kawa is of course referencing the very public falling out which occurred between UFC flyweight kingpin Demetrious Johnson and Dana White after the UFC attempted to get Johnson to fight TJ Dillashaw after pressuring him into agreeing to fight Ray Borg just prior.

That rift is still being resolved.