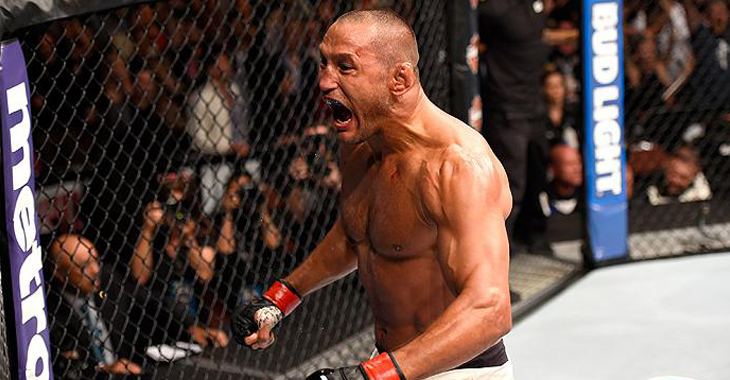 Interestingly enough, this isn’t the first time that the pair have been set to compete against one another. Back in 2012, Jones and Henderson were set to meet in the Octagon at UFC 151 for a highly anticipated light heavyweight title fight, where Henderson hoped to capture the elusive UFC championship belt. Unfortunately, due to an injury, Henderson was forced to pull out of the card, and the fight was never rescheduled. Now, four years later, the pair will get the chance to compete, this time in a competitive grappling match. Ahead of their meeting, Jones has stated:

“I’ve faced a lot of great wrestlers and all of them had better credentials than I have,” Jones told FloCombat. “It’s always the same story. They say, ‘I’m going to outwrestle Jon Jones,’ and it’s always me putting them on their asses. I’m excited to go out there and do it one more time.”

That didn’t sit too well with Hendo, who fired back in an editorial piece for Champions.co, writing:

Now, onto Jon Jones who I will be facing at Submission Underground 2 next month. I saw some interview he did where he said that he’d put high level wrestlers on their ass and planned to do the same to me. Sit down, kid. You’re letting your mouth write checks you can’t possibly make good on. I’ll be taking one of your arms home with me.

I’ve got a few favorite submission moves, but I’m pretty partial to armbars and leglocks. Vitor did a pretty good job with an armbar on Jonny four or five years back. I plan on going the extra mile to get the job done.

Only time will tell whether or not Jones is able to extend his unbeaten streak to competitive grappling, or whether Hendo will emerge victorious over the arguable pound for pound kingpin.