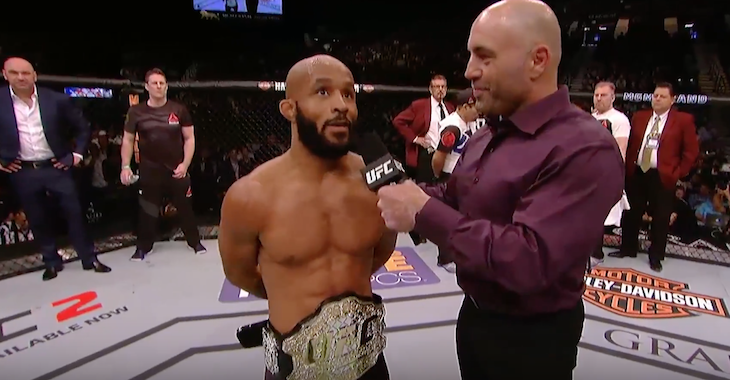 According to Mighty Mouse, however, being the pound-for-pound best doesn’t mean all that much. In a recent interview with Fox Sports, Mighty Mouse addressed his place atop this speculative list.

“There was one point at time I was the number one pound-for-pound fighter in the sport. Jon Jones hadn’t fought in eight or nine months, [and then] he got reinstated and blew right past me and not one thing in my life changed. Not one single thing,” Johnson said.

“Still woke up, took a sh*t, wiped my ass, poop on the toilet paper looked exactly the same, went to the gym, trained, sweat still came out the same. I think [pound-for-pound rankings] are more for the fan’s perspective.” The only way pound-for-pound rankings will become meaningful to him, Mighty Mouse continued, is if they start to imply a pay-boost.

“Unless the UFC was like, ‘if you’re the number one pound-for-pound fighter in the world you get an extra $40,000 bonus check every year,’ then I’ll start coming out of the woodwork and say, ‘yeah I’m the number one fighter in the world and the reason why is [Conor McGregor] just got f*cking choked out by Nate Diaz and you mismanaged your energy output’,” Johnson said, explaining why he believes he sits above McGregor on the pound-for-pound list.

“Having that number one spot is basically just bragging rights and I’m not a bragger,” Mighty Mouse continued. “I just go out there and fight. If there was money involved and it was guaranteed if I had that number one spot, yeah, I would fight for it, but there isn’t.”

“So if Conor ever wants to say anything about [being the pound-for-pound best], talk about me and say this and that, whatever, that’s totally fine. I’m not going to waste the energy on it.”