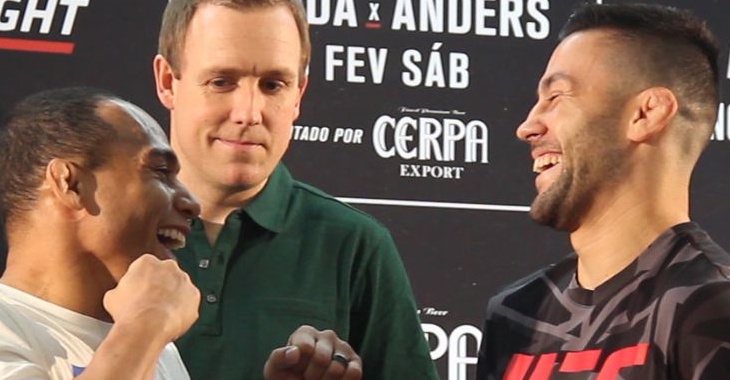 Last Saturday’s UFC Fight Night 125 from Belem, Brazil lost it’s co-main event just a day before the event took place. Originally, the co-main was supposed to be a top bantamweight clash between submission specialist, Pedro Munhoz and former two-time flyweight title challenger and season 14 winner of The Ultimate Fighter, John Dodson. That was until Munhoz missed weight by four pounds, resulting in a cancellation.

It was discussed whether or not the UFC would try and rebook the fight or not but now MMAFighting reports that UFC officials have confirmed that they have moved the fight to UFC 222 in Las Vegas.

UFC 222 is currently still searching for its new main event after the original headlining title fight between Frankie Edgar and featherweight champion, Max Holloway fell through. There has been plenty of speculation about what the new headliner might be or if the event will even happen now. But the addition of this fight makes it feel like it will indeed still happen…because why add a fight to a card you’re not going to have happen?

The UFC has only canceled three events in the organization’s history. First being UFC 151 after Dan Henderson pulled out of his title fight with Jon Jones, UFC 176 when Jose Aldo was forced out of his rematch with Chad Mendes and UFC Fight Night in Manila that was to be headlined by Ricardo Lamas and BJ Penn until Penn got injured.

The UFC appears to be close to inking a new main event(according to Ariel Helwani) between Frankie Edgar and Brian Ortega. Other rumors were afloat that the UFC may have wanted to throw a championship rematch between UFC bantamweight champion, TJ Dillashaw and former champion, Cody Garbrandt at the top of UFC 222.

Currently, the card is almost complete as it has eight fights planned excluding the newly rebooked Dodson vs Munhoz fight. Here’s what’s planned for the March 3rd event at the moment: