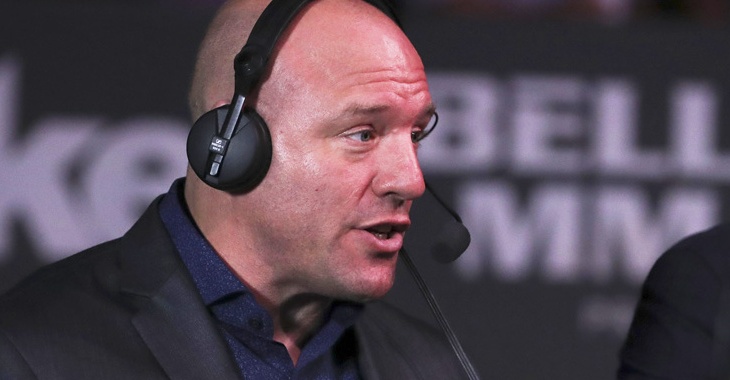 If you’re a fan of Bellator, then you know exactly who Jimmy Smith is. Many have called him “Bellator’s Joe Rogan”, but they can’t call him that anymore! Bellator’s longtime color commentator, Smith recently parted ways with the organization that he was the voice of. He now finds himself with yep…you guessed it, the UFC.

At UFC 221 in Perth, Australia this Saturday, Smith will make his UFC commentary debut and in the main event is a big middleweight matchup between Yoel Romero and the former UFC and Strikeforce middleweight champion, Luke Rockhold. The winner takes with them the interim title which inevitably leads to a meeting with the undisputed champion, Robert Whittaker.

Smith can’t make predictions as commentators can’t show any possible bias towards the events they’re working at but they can analyze and share their thoughts on the fights. Smith broke down the fight on the Outside the Cage podcast recently:

“When you talk about the physical talent of these fighters like you just said, the physical ability…there aren’t many middleweights who can do everything these guys can do. That’s what makes it so interesting. What I think will be the key to the fight, and i’ll give you guys an early preview, is Yoel Romero…and i’ve been watching these fights non-stop, for the last couple weeks. He tends to wait and wait and wait and then BOOM explode. He’s that kinda guy, you don’t realize he’s just kinda taking his time and he just attacks out of nowhere.

There are very few times when Yoel Romero will fight or, ya know, in a three-round fight sit ten minutes straight, he doesn’t do that. He takes his time then he explodes with a few minutes every round. Don’t give him those breaks. I think that’s the key to the fight.

I think if Luke Rockhold can work for twenty-five minutes, he [Romero] is not really built to do that. That’s not his style, that’s not his physiology. Make him work the entire time and you can wear him out. And Luke Rockhold to his part, needs to tighten up those defensive gaps that we saw recently in his career. He likes to let his hands get low, he likes to have a little swagger when he gets in there and that’s cost him before and he needs to tighten that up against a guy who’s so explosive.”

Do you agree with Jimmy? Who do you think walks away with the title on Saturday?