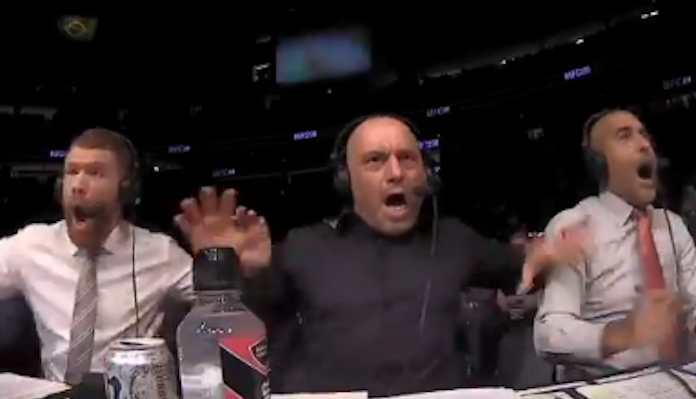 UFC commentator Joe Rogan watches a lot of fights. Despite his extreme exposure to combat sports, though, his jaw can be left on the floor by wild knockouts — just like the rest of us fight fans.

On Thursday, the UFC posted a video of some of the best cage-side reactions from Rogan and his fellow commentators Jon Anik, Daniel Cormier, Dominick Cruz, and Paul Felder.

See this tremendously entertaining video below — which also provides a great chance to relive some amazing knockouts.

On a recent episode of his Joe Rogan Experience podcast, Rogan discussed what it’s like to consume so many fights. Apparently, he can sometimes be forgetful in other parts of his life, but he rarely forgets the details of important fights.

“If you talk to my wife and ask her what she told me about 10 minutes ago, I will not remember what the f**k she said,” Rogan said. “There’s a lot of s**t I don’t remember. But I have like storage units [for fights] in my brain.”

Over the last few years, a number of fighters, such as Felder and Cormier, have joined him at the commentary desk.