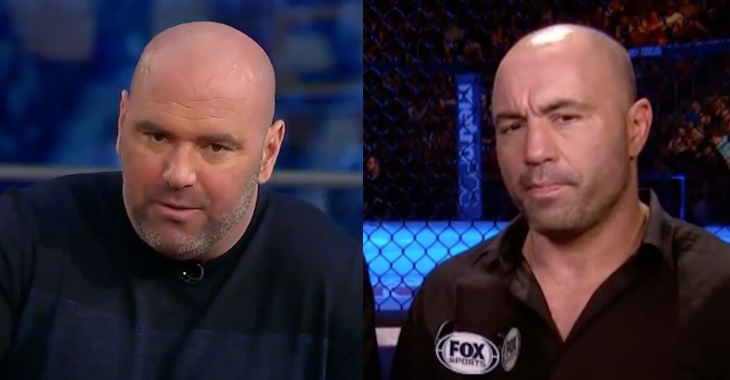 The sport vs. money fight matchups will be argued time and time again, especially after bouts such as Michael Bisping vs. Georges St-Pierre are announced by the UFC.

With contenders climbing their way up the rankings their entire careers only to be leapfrogged by a more popular star that will sell a fight more, UFC commentator Joe Rogan understands why money fights are being booked ahead of the sport ranking system. However, that doesn’t mean Rogan is fully supportive of the championship matches being arranged.

“As a person who deeply respects the position of champion – if you’re gonna do this whole interim title thing and you’re gonna have guys come back after being out of the sport for three years and get a shot right at the title, why have f**king championships at all?” Rogan questioned on ESPN’s 5ive Rounds podcast (transcribed by Jed Meshew for MMA Fighting).

Rogan stated that although the fight between Bisping and St-Pierre is a great fight, it is a poor matchup for the sport of mixed martial arts that many fans and pundits will agree with.

“I don’t like it. I’m not concerned because there’s great fighters and you get them together and you make great fights. I’m not concerned at that. But from a purist point of view, and someone who feels like – look, if you’re going to have a champion and you’re gonna have these divisions where one man rules over the division, there should be a very clear hierarchy… If you have a champion and you have all these people waiting in line to get a shot at that champion, the person who is perceived to be the best in that division is the one who should be fighting the champion next. The champion should always be fighting the number one available challenger. Right now, that is Yoel Romero.”