Home » MMA News » UFC » Former US President Donald Trump weighs in on the ... 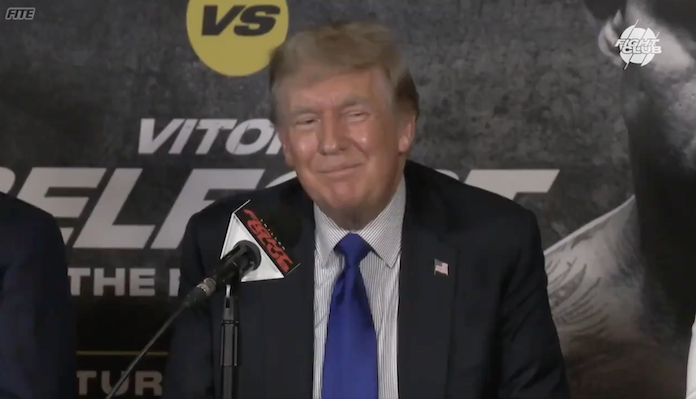 The lastest ‘celebrity’ to comment on the Joe Rogan saga is none other than former US President, Donald Trump.

While musicians, doctors and medical professionals, actors and the like have weighed in on the controversy surrounding Joe Rogan and his podcast ‘The Joe Rogan Experience’, Donald Trump felt the need to make his own thoughts known.

Rogan has come under intense scrutiny for having guests on his podcast who provide disinformation or conspiracy theories concerning COVID-19 and more recently his use of the ‘N-word‘ on previous shows.

“I know that to most people, there’s no context where a White person is ever allowed to say that, never mind publicly on a podcast, and I agree with that,” he said. “Now, I haven’t said it in years,” Rogan added.

Donald Trump wanted to give some advice to Joe Rogan to “stop apologizing” to the “Fake News”. As everyone well knows, “Fake News” is a favorite term of the former President.

It should be noted that Trump was banned from Twitter ever since the Capitol riots, back in January of 2021, and therefore has had to resort to email to get his comments out to the press stating:

“Joe Rogan is an interesting and popular guy, but he’s got to stop apologizing to the Fake News and Radical Left maniacs and lunatics.” Trump said in a statement Monday night.

“How many ways can you say you’re sorry? Joe, just go about what you do so well and don’t let them make you look weak and frightened,” the former president added. “That’s not you and it never will be!”

Joe Rogan has a huge following on his podcast, upwards of 11 million viewers per episode. It sounds like Donald Trump is a fan as well.

Spotify who reportedly paid more than $100 million back in 2020 for sole rights to the podcast is standing by their man through all these controversies.

Do you agree with the advice former President Donald Trump has for Joe Rogan? Share your thoughts in the comment section PENN Nation!