‘Cookie Monster’ is set to return to action this Saturday at UFC 281 against Weili Zhang. ‘Magnum’ is fresh off her knockout win over the former Polish champion in June. Heading into the title fight this Saturday, Zhang is a massive betting favorite.

Most of the reason why comes from how the champion secured the title. In May at UFC 274, Esparza captured gold with a split-decision win over Rose Namajunas, making it 2-0 in her series with ‘Thug Rose’. However, while the first fight eight years prior was a dominant win, the rematch was anything but.

In the rematch in May, nothing much happened at all. For 25 minutes, both women did little in the form of action. Ultimately, it was Esparza who claimed the win, but it didn’t feel like anyone really was victorious.

During UFC 281 fight week, fans have taken out their anger from the May title fight out on Carla Esparza. During the press conference and the ceremonial weigh-ins, the champion was ruthlessly booed. That sort of thing doesn’t sit well with Joanna Jedrzejczyk.

During a media day interview, the retired former champion came to her defense. According to Jedrzejczyk, the champion deserves respect, as she holds the gold right now. 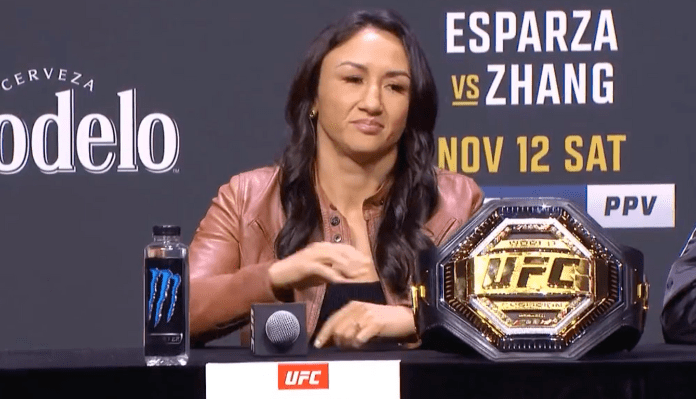 “She’s the champ, she deserves respect and all the attention,” Jedrzejczyk said. “It’s not only about being the best athlete, it’s about having the best character if fans see charisma in you or not. If I was becoming the strawweight champion for a second time, I would get bigger. I would double the amount of followers, money, contracts, everything. It looks like for Carla Esparza, it’s enough. It’s okay, we have to respect that, but she’s the champ so she deserves all the respect right now.” (h/t MMA News)

Joanna Jedrzejczyk and Carla Esparza famously clashed at UFC 185 in March 2015. In that outing, the Polish fighter dominated en route to a second-round knockout win. Seven years on from the bout, Jedrzejczyk seems to have respect for her former foe.

This article appeared first on BJPENN.COM
Previous articleIsrael Adesanya hits back at idea that Bo Nickal would easily outwrestle and submit him: “This is not wrestling, this is MMA”
Next articleAlexander Volkanovski reveals plans to be active ahead of Islam Makhachev superfight: “I’m at my peak right now”
© Newspaper WordPress Theme by TagDiv