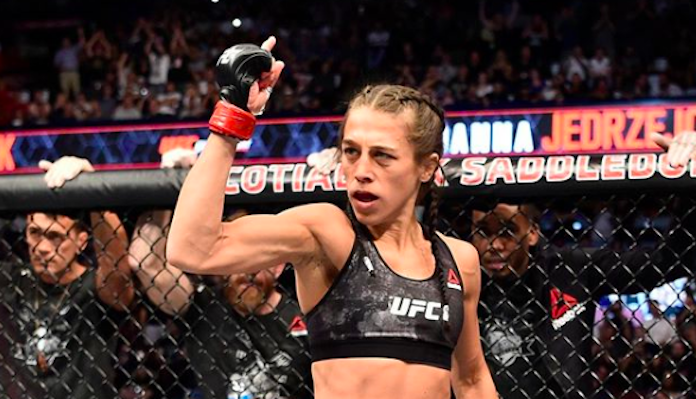 Joanna Jedrzejczyk was once unbeatable in MMA as she went 14-0. During that stretch, she won and defended the strawweight title five times. Ultimately, Jedrzejczyk met her match as she lost back-to-back fights against Rose Namajunas.

With Jedrzejczyk 0-2 against the current champion, another title shot at strawweight is unlikely, so a move up to flyweight makes sense.

Jedrzejczyk has said multiple times throughout her career that making 115 pounds is difficult. Therefore, moving up to 125-pounds seems logical, especially if her first fight is for the belt.

“Who knows, maybe this year,” Jedrzejczyk told MMAjunkie. “The thing is, I’m very open to move up and face Valentina [Shevchenko]. I always want to face the best athletes, the best fighters in the world. Valentina is one of the greatest Muay Thai and also MMA fighters. I’m very open, but I must sit down and discuss some things. We’ll see what’s going to happen.”

If Jedrzejczyk, does, in fact, move up to flyweight for the title, a fight against Valentina Shevchenko will be hard. Jedrzejczyk and Shevchenko have already fought three times in Muay Thai, where Shevchenko came out notorious in all three. It is also the only time a fighter has beat Jedrzejczyk three times.

Shevchenko knows what it takes to beat Jedrzejczyk, but this fight would be MMA rules and in the Octagon, which completely changes the game. If Joanna makes the necessary adjustments and wins the fight, it will be a check off her bucket list.

While her future is uncertain, Jedrzejczyk knows for sure that she thought a strawweight contender would have a better outing at UFC 228.

“I really thought Karolina [Kowalkiewicz] was going to do better, but you can’t take punches with no guard from Jessica Andrade, so it was a big mistake,” Joanna explained. “But I believe Karolina will be back very soon, and I hope she stays strong.”

No matter what happens, Jedrzejczyk has options. If she wants another crack at the strawweight title she needs Namajuans to lose the belt. If ‘Thug Rose’ continues to defend the title, a move to flyweight should be coming soon, and for Jedrzejczyk, she is very open to it.

Would you be interested in a Jedrzejczyk vs. Shevchenko fight for the flyweight title?