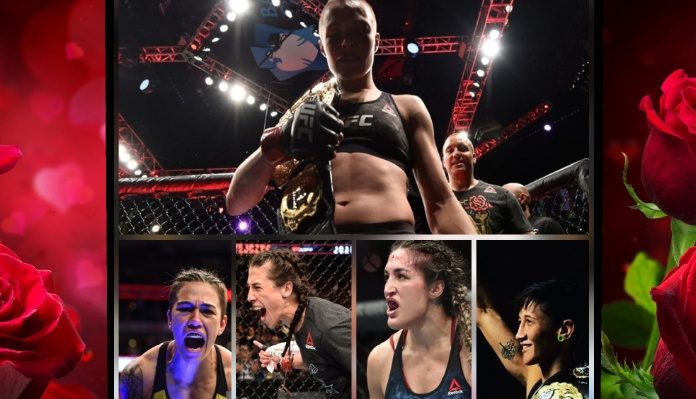 At UFC 228, we witnessed somewhat of a shift in the power balance at 115-pounds. And for that, it’s pretty likely that we will have one solid top 5 of elites for the years to come.

Since it’s introduction to the UFC in 2014, the strawweight division has rapidly become the best women’s division in the UFC. After multiple years with one dominant champion, the tide turned late last year and now things have gotten incredibly interesting at the top of the heap.

Some division staples have slid down the ladder as the new faces have emerged and made their presences felt. And we better get used to seeing them around because it’s likely that they’re here to stay.

If you don’t know about Virna Jandiroba yet, you soon will.

Brazil’s Jandiroba is the current Invicta FC champion. Therefore she isn’t in the UFC yet. “Yet” being the keyword. Hell, she’s hoping for that too and even threw her name in the hat to fill in for Nicco Montano after she was pulled from her fight at UFC 228.

It will come as quite a surprise if “Carcara’s” next fight doesn’t come within the UFC and once she’s there, the sky is the limit.

Holding a flawless record of 14-0, Jandiroba has touted herself as strawweight’s version of Demian Maia. To this point, that hasn’t at all been an unreasonable claim.

When people think of superior grapplers, they always question how their striking is but that is no issue for the Invicta champion either. Jandiroba has very solid technique with all of her strikes, her jab and body kicks in particular. But her main goal in that department is always to lull her opponents into thinking she will stand with them and then strike for the takedown. Which is a gameplan that has yet to fail.

Then once on top, that’s generally where she will stay until the round is over or her opponent is forced to submit. But, of course, she can handle herself off her back as well.

Jandiroba is one of the best and most experienced submission grapplers in the division and because of her great skillset should see her as a future mainstay among the division’s elite as the submission ace of the bunch.

If there was one word that would best be used to describe The Ultimate Fighter season 23 winner Tatiana Suarez, it would be “dominant”.

Like Jandiroba, Suarez also holds a perfect record and with every fight, she dominates more so than she did in her last.

This was on full display in her incredible smothering of the former inaugural champion of both UFC and Invicta, Carla Esparza.

For the better part of the division’s history, Esparza has been the top wrestler. Which made everything that went down in the cage at UFC 228 all the more mind-boggling.

Esparza had about as little success as one could possibly have in a fight as Suarez applied non-stop pressure and secured 9 of 11 takedowns, outstriking Esparza 136 to 12 over the course of three rounds before the referee mercifully called off the action with 27 seconds remaining.

Wrestling dominance like that has never been seen inside the division and Suarez only continues to get better. As a 27-year old one-time Olympic hopeful, it’s pretty much a guarantee that the Khabib Nurmagomedov-like Suarez will be a 115-pound staple for the foreseeable future.

As eluded to in the opening of this article, there was a queen who ruled over the division for most of its time since being in the UFC. That was none other than Joanna Jedrzejczyk.

In her career, Jedrzejczyk has only been bested by the current champion in Namajunas. However, despite the two losses, it doesn’t make her any less of an important figure in the division she helped build.

As just one of the best pure strikers in MMA in general, Jedrzejczyk has set the bar for the rest of the division when it comes to the standard they need to be at to hang with her. And this continued to show after her losses when she rebounded with a defeat over a perennial top 10er in Tecia Torres.

Precision accuracy, limitless cardio, and stellar takedown defense are all primary skills that will always keep Jedrzejczyk in the title picture and elite discussion.

The only questions for her now are for how much longer will she continue to attempt to recapture gold and will she test her luck at 125-pounds? Depending on how things shake out between some of the others that are being mentioned, we’ll just have to wait and see.

Jessica Andrade’s nickname is “Bate Estaca” which translates to “piledriver” or “ram”. To put it simply, these are accurate descriptions of her fighting style.

Like Suarez, Andrade is also relentless with her pressure as she is always walking her opponents down. The big difference being that Andrade is always packing loads of power whether it be in her fists or her takedowns.

No one throws bombs quite like Andrade can especially among the female fighters and she is more than willing to take one to give one which has always worked in her favor. To see that at it’s fullest display, go check out her recent knockout over Karolina Kowalkiewicz.

Andrade personifies a tank when entering the octagon as she runs over her opponents with her tornado-like hooks or her powerful grappling. What she lacks in technique, she more than makes up for in power which is evidenced by the many slams that she has hit on her opponents leading to their downfall.

At 115-pounds, Andrade has only tasted defeat at the hands of Jedrzejczyk and some believe that things would play out differently if the two met again. All we know for sure is that the still just 26-year old Andrade will be hanging around the top for as long as she can keep her aggressive onslaughts going and that could very well lead to a world title sooner rather than later.

Currently sitting in the 115-pound throne is the youngest of the bunch, the UFC champ “Thug” Rose Namajunas.

Having got her initial crack at the title back when the division was brought in through TUF 20, Namajunas has more than come into her own since then.

It’s a bit fitting that the one at the top has a little bit of everything that the others do. Namajunas has shown her technical striking prowess in her rematch with Jedrzejczyk, outpointing her at her own game en route to a unanimous decision over five rounds.

She showed finishing ability with her strikes against Jedrzejczyk in their first encounter as well as against Michelle Waterson. A 12-second flying armbar in her second pro fight along with three straight submissions (two of which were kimuras) to earn her spot in the TUF 20 finals prove that she is dangerous from anywhere.

Complete grappling domination over Paige VanZant showed major improvements from her loss to Esparza in her UFC debut. Namajunas can do it all which is why she’s currently the best and there’s no reason to believe that she won’t be one of the best for years to come.