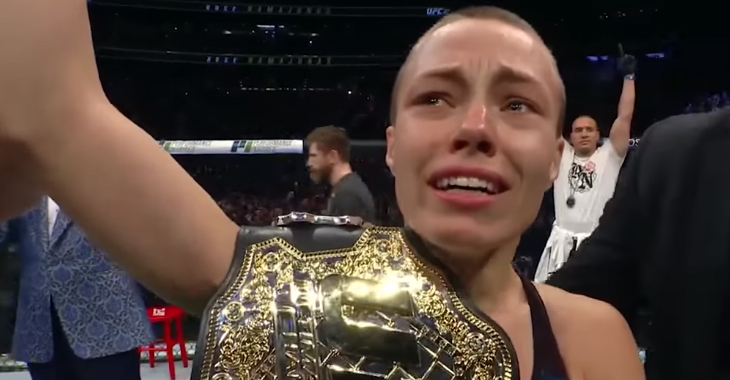 Joanna Jedrzejczyk in the build-up to a fight is usually just as frightening as she is inside the cage, but things got especially nasty during the build-up of UFC 217. It was a startling contrast between the way Rose Namajunas handled the situation. Amidst the chaos and whatever happened behind the scenes with Pat Barry, we could see things play out in the staredown: Jedrzejczyk detailing all the violent things she told Namajunas to her face, while Rose just stood there and stood like Fedor Emelianenko. Despite all of this and the shocking result on Saurday, Joanna Jedrzejczyk paid her respect to the new strawweight champion afterwards.

“[Joanna Jedrzejczyk] came up and congratulated me after [the fight at UFC 217] and said all the best. You know, that’s that really. This is a job. I had a job to do. I couldn’t get emotional about it. Of course, I don’t agree with her getting all personal and stuff. That’s not my style, but that’s what she’s got to do to feel comfortable to get in that cage. That’s what she’s gotta’ do. I just expected it, so I’m not going to attach no feelings to it.”

“That was backstage [when Joanna Jedrzejczyk talked to me]. She said congratulations and all the best. Just humbled and respectful. I’m ready to fight right now, but not. Totally not. Emotions all over the place. I don’t know [about an immediate rematch]. I think she might need some time to process this herself. That was brutal. It was clean, decisive, no fluke, not nothing, so a rematch right way, we’ll have to see and talk to the UFC.” — Rose Namajunas speaking to TMZ.

After Rose Namajunas took a stand against hate as an example in her post-fight speech, the news that Jedrzejczyk was all class in her defeat had to be a nice gesture given everything that transpired. It will be interesting to see how things would unfold if the two fight in a rematch with all the tables turned. Rose Namajunas doesn’t rule out an immediate rematch, but thinks it not necessary given how emphatic her victory was over the former champ.