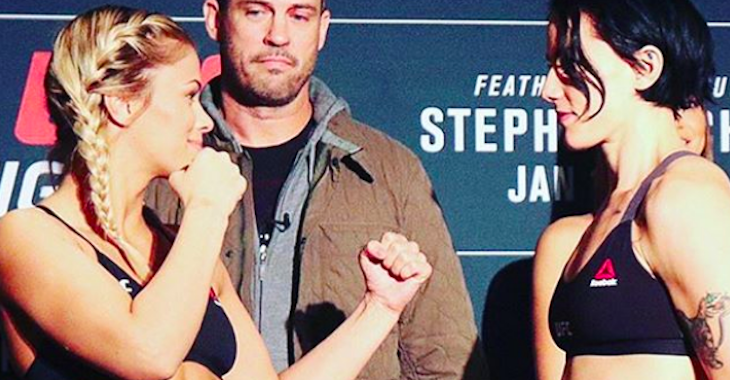 Last night, in the co-main event of UFC St. Louis, Australia’s Jessica-Rose Clark picked up one of the biggest wins of her career, out-duelling former strawweight star Paige VanZant to a unanimous decision win. Unfortunately, not everyone was impressed by her performance.

Post-fight, the talented Australian fighter was accosted by an army of braindead haters on social media. She shared a few of the negative messages she received on social media.

Paige has some crazy fans pic.twitter.com/lvnEbzVVMs

While Clark would deserve applause for her win over VanZant under any circumstances, her performance was made even more impressive by the fact that it came just days after her home was robbed. During this robbery, she’s reported to have lost $30,000 of property. Her cat was also killed by the intruders.

All the same, Clark seems to be a little disappointed with her performance.

That moment when you know you won, and your team is trying to congratulate you, but you’re just pissed that you didn’t do more to entertain the crowd and the fans. Yeah a win is a win, but I’m an entertainer at heart and there’s nothing more disappointing than not being able to do what you’re capable of doing, even with a victory. This week was rough. The last 3 weeks have been rough. From getting really sick 2 weeks out and not being able to train without feeling like I was having an asthma attack, to multiple injuries (everyone has them, I know), to the events of this week… it’s been a roller coaster that takes its toll physically and mentally. I’m super stoked to be walking out of the @ufc cage with a 2-0 record now, and having officially made the flyweight limit, and I vow to each and every one of you that my next venture inside the UFC octagon will be one to remember!

Who do you want to see Jessica-Rose Clark fight next?