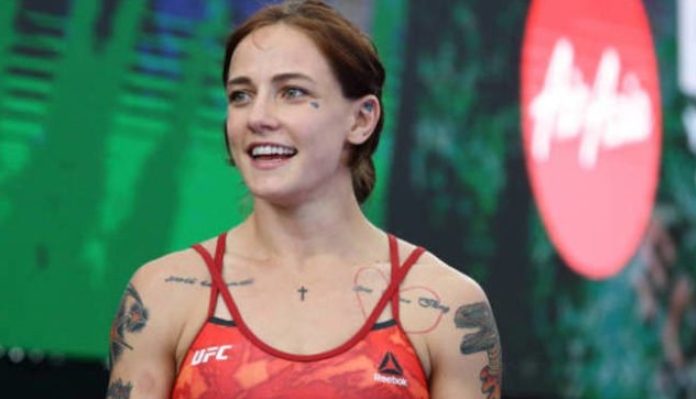 Fan favorite Jessica-Rose Clark offered to fight UFC Vegas 31 winner Miesha Tate in November, saying that “it would be an honor.”

Tate defeated Marion Reneau via third-round TKO at UFC Vegas 31 on Saturday night in her return to the Octagon after five years away from the sport. By defeating Reneau, Tate will take her spot in the UFC women’s bantamweight top-15 rankings as she looks to get close to earning another title shot at champion Amanda Nunes. But in order to get back to the top of the division and potentially earn a title shot, Tate has to get past some of the other top contenders in the division, and one of them in Clark specifically wants this fight.

Taking to her social media following Tate’s win over Reneau, Clark suggested that she will be returning to the Octagon later this year and she wants to fight “Cupcake” in her return.

Hey @MieshaTate if you want to fight again in November, I’m your huckleberry!
It would be an HONOUR to compete against you!
Congrats on your win tonight! @ufc

Hey @MieshaTate if you want to fight again in November, I’m your huckleberry! It would be an HONOUR to compete against you! Congrats on your win tonight! @ufc

Clark is 3-2 overall in the UFC and was most recently seen defeating Sarah Alpar via third-round TKO last September. Clark has not been able to fight yet in 2021 due to injuries but she plans on making her comeback later this year and if Tate is available to fight, then this is the fight that Clark wants. Since she isn’t currently ranked it seems more likely that Tate would politely decline this callout in order to face off with someone in the top-15, but if the UFC likes this matchup between Clark and Tate there is always the chance it could be made as it would be a fun fight between two veterans of the sport.

Do you want to see Jessica-Rose Clark fight Miesha Tate in November?