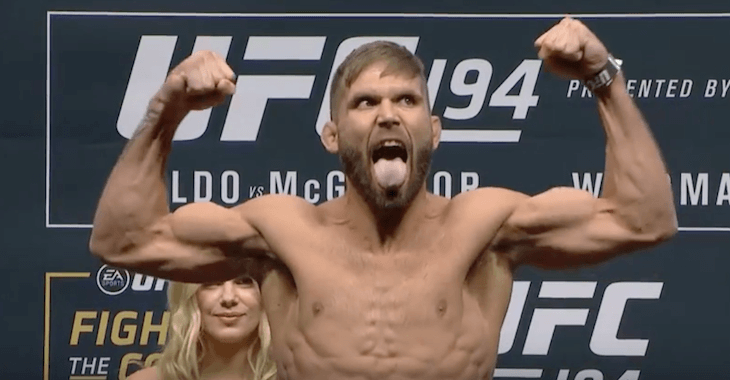 Jeremy ‘Lil Heathen’ Stephens must be one of the biggest featherweights on the UFC roster. The former lightweight posted a photo on Facebook recently with 170 pound champion Tyron Woodley, and ‘Lil Heathen’ looks bigger than the welterweight champ!

See for yourself how Stephens stacks up size-wise with 170 pounders.

Stephens is set to take on former lightweight champ and featherweight contender Frankie Edgar at the historic first UFC event in New York. The two 145 pound contenders will clash at UFC 205 on November 12, and Stephens is looking massive just a month away from fight night.

The former lightweight dropped to 145 pounds back in 2013, and is currently ranked number 7 in the featherweight division.

‘Lil Heathen’ most recently defeated former bantamweight champ Renan Barao in May, and a victory over another former UFC champ could put Stephens in the mix for a title shot. Meanwhile, Edgar will look to rebound after dropping a decision loss to Jose Aldo for the interim featherweight strap at UFC 200. Prior to the loss to Aldo, Edgar rattled off an impressive five fight win streak.

What do you make of Stephens photo with Woodley? Are you surprised at ‘Lil Heathen’s’ size just weeks away from UFC 205? Sound off in the comments section, PENN Nation!