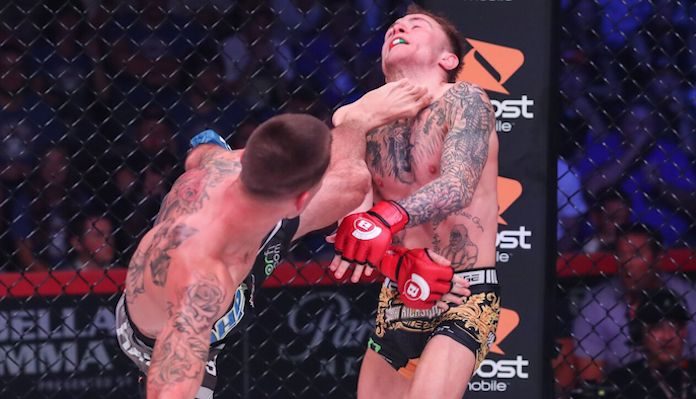 Last night, on the main card of Bellator 204, bantamweight prospect James Gallagher stepped into the cage with former CFFC champ Ricky Bandejas. Heading into this fight, Gallagher was as confident as ever. He even taunted his opponent as the bout was being announced.

Unfortunately, the bout did not go as planned for the brash, 21-year-old Irishman. Instead, he was knocked out in the very first round, succumbing to a side kick to the face and a volley of followup punches.

It was a tough loss for the cocky young Irishman, and a moment of celebration for his haters. Yet he seems to be in good spirits despite the loss.

In a pair of post-fight Instagram posts, James Gallagher discussed this setback, and promised the best is yet to come. He also assured his cocky attitude isn’t going anywhere.

“He caught me I got beat fair a square,” Gallagher said in his first post-fight statement. “I’m 21 years old I’m still a fucking animal I will be back!! I love this game. It’s what I do. I’m down but not broke he caught me lucky I got clipped I went In on my Shield I’ll go out on it. I’m an animal. Fair play to him the whole game knows him now. Let’s go again. I’m coming back! Thank you everyone for all the support. To everyone glad fuck you haha I just got paid your years salary for doing something I love. I put my money where my mouth is! Thanks for the support I’ll be back December. There’s no one who has done what I have at 21 years old. I’m still that cocky mother fucker I am when I win and I’m still that cocky mother fucker when I loose. Thank you to everyone whose behind me.”

“I talked a big game and got the big fall, that everyone scared To do,” he added in a second post-fight comment on Saturday morning. “If I hadn’t of talk none of you would be talking about me either. It’ll be the best thing that ever happened me!! I’ll take it on the chin ( literally) and move on. Hats off to my opponent, I show up fully prepared ready to go there’s no excuses. I’m going to bounce back from that loss and climb my way back up and become world champion. I woke up today with no injuries and with the people who care still around me. I get back to the gym put in the work and climb my way back. Nothing will keep me down! My spirit is bruised , never broken! I’m still the shit!”

What do you think the future holds for James Gallagher after this tough KO loss to Ricky Bandejas?