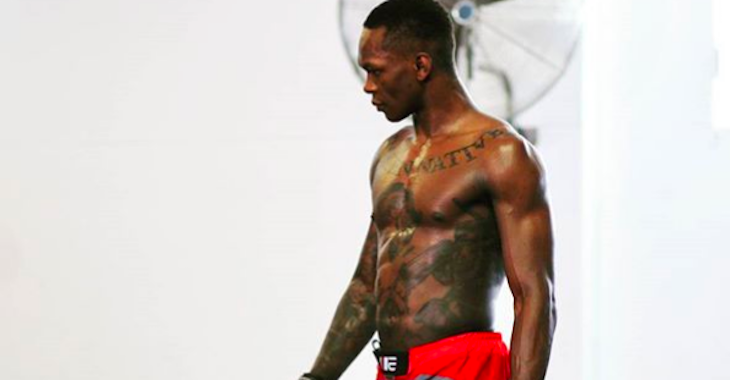 Israel Adesanya believes that destiny has been leading him to everywhere he’s been so far. Traveling the world becoming a master of styles finally resulted in him breaking into the UFC and marking his territory after his successful debut. Carrying on with his mystical journey, Adesanya doesn’t see any other location his pilgrimage takes him other than against Robert Whittaker for the UFC middleweight title.

“With Robert [Whittaker], for whatever reason, he might lose the belt then gain it back, or I gain it and he tries to take it away from me in Spark Arena. But I just know me and him are gonna fight in Auckland by the end of 2019, and I just see the way we are because he’s good, I’m great. You know, it’s just gonna be for the belt. I’ve never met the guy. I’ve seen him across the room or across places, but I’ve never really had a word with him. It’s never anything personal, it’s just business, it’s just the game we’re in. He knows. It’s a fighter thing. When you look at each other and you just kind of have this potential of like, ‘Yeah, I see you, you see me’. It’s just a thing.”

“It’s like two dogs looking at each other from across the room sometimes where they can smell each other, like, the scent. You know, when a dog leaves the scent like another dog’s been here and so it just pisses on it. Yeah, so it just kind of been like that with me and him. It’s like one of those things that I keep saying as well, these guys, they never mention me, they will never say my name, but like I said, they know who the f-ck I am now, so they have to take notice. I’m not just here to make up numbers and show face, I’m here to wreck shop. You can ask him about me, but a lot of these guys, and I see you creepin’ on my Instagram and I see you guys on my shit, but they just wanna pretend like they don’t know me. And it never bothers me, I’m just gonna make them – you don’t have to like me, but you will respect me.” — Israel Adesanya speaking to Submission Radio.

Could Israel Adesanya be the new Mystic Mac? The Last Style Bender fighting Robert Whittaker in New Zealand in 2019 is a helluva prediction. He’ll have to get past Marvin Vettori at UFC Glendale in April to continue his path directly to a title, but every marathon starts with a single step. Another big win could get him into the top 15 and land him a big opponent if the UFC is going to fast track him, obviously Adesanya isn’t scared of that either.