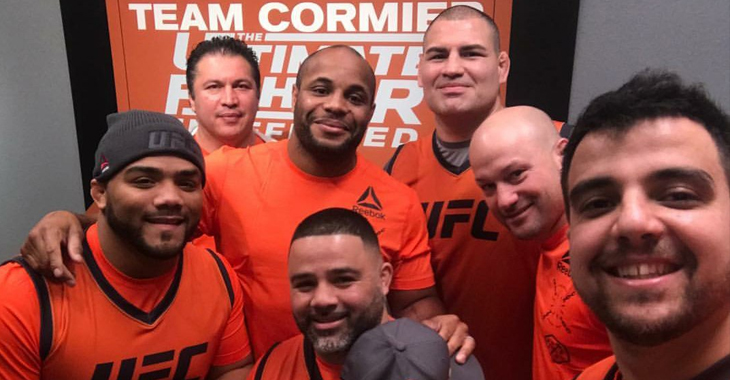 You have to be living under an MMA rock if you don’t know that Stipe Miocic is defending his UFC heavyweight title against UFC light heavyweight champion Daniel Cormier at UFC 226. The entire super event will be built up with an entire season of The Ultimate Fighter, which actually just wrapped up. We have a couple of months to wait before the show drops, but Cormier took some time out to film him reacting to the end of the show’s 27th season.

“That’s a wrap. The Ultimate Fighter team [Stipe] Miocic versus team [Daniel] cormier. It has been an amazing journey. I would not have wanted to do it with anyone better or different that Stipe. Can’t wait till July 7th. Had a little action going on in this ring today. I can not wait until you guys see this season. It is crazy. Crazy, crazy, crazy. It’s been tough being away from the family, wife and kids, but it’s an experience that I never thought I would have.”

“I can not wait for you guys to watch this season. Thank you so much for all the support and everything else. I appreciate each and every one of you. […] It has been amazing! Thanks to the entire Ultimate Fighter staff for being awesome. Thanks to Stipe Miocic and his coaching staff for being gentlemen. I can’t wait until you guys get to watch this. It was a great season. Thanks to my coaches, appreciate y’all.” — Daniel Cormier on his official Instagram.

As you can see, Max Holloway shows up as a guest coach for Daniel Cormier’s star-studded team which includes Cain Velasquez. Holloway is just one guest out of people like Olympic gold medalist Jordan Burroughs and former UFC middleweight champion Luke Rockhold that will show up during the season sporting the orange and black. It looks like the whole season will play out respectfully, which is no surprise given the two coaches. TUF 27 will air April 18th and Miocic and Cormier will fight for the heavyweight title at UFC 226 on July 7th.