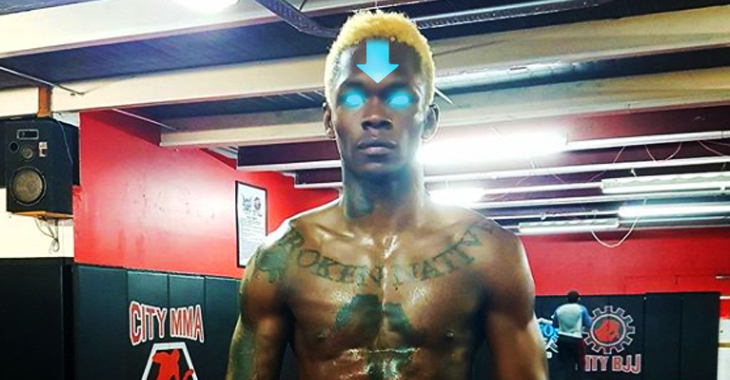 Everyone loves a stylish fighter. Anthony Pettis will forever be remembered from walking up the cage at WEC and flying across the canvas to kick Benson Henderson in the face. You could flip the channel on your TV right now and chances are you may find a highlight of Anderson Silva putting Forrest Griffin in the Matrix. Israel Adesanya will look to turn heads with another knockout worthy of his reel this Saturday in his UFC debut. He believes it’s his destiny as a ‘Style Bender’.

“F-ck that. I gave myself the nickname [Style Bender]. People say, ‘Oh, you can’t give yourself a nickname.’ But I was like, why? I make my own destiny. I don’t want my destiny to be in someone else’s hands. It made sense to me, because Aang the Avatar had to realize his potential of being the Avatar by mastering all the elements, which is water, fire, earth and air. And I have to realize my destiny of master all the elements of martial arts to be here [in the UFC].”

“I started when I was a kid. I did Taekwondo as a kid but then my mom pulled me out of it because I started kicking everything in the house. I started dancing for a few years — krump, B-boying, popping – I’m like a copycay ninja. If I see something, I can replicate it very well. So, that dancing parlays into fighting easily because then my muscle memory is able to remember moves and sequences. […] I’m still learning. There’s a lot I don’t know and a lot I don’t know that I don’t know.” — Israel Adesanya speaking to Submission Radio.

He has nearly 100 fights with his records combined at kickboxing and boxing, but as for MMA he’s undefeated with 11 wins. …All by knockout. In what is the biggest moment of his career so far, his mastery of styles will be on full display at UFC 221’s FS1 prelims. Can he make good on the hype is the million dollar question. The UFC is in desperate need of another breakout star and Adesanya has all the ingredients to become just that.