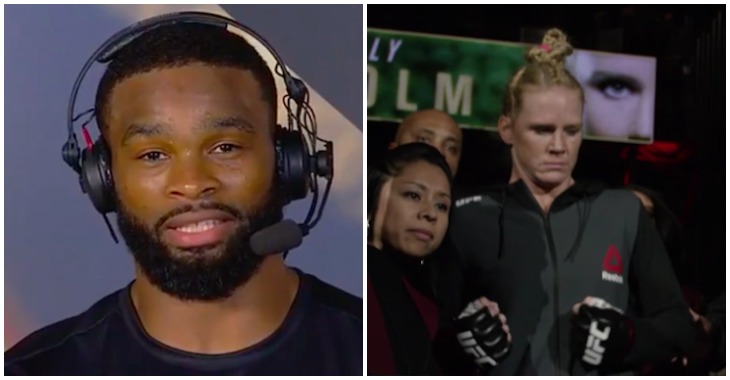 Last weekend, in the main event of UFC 208, former women’s bantamweight champion Holly Holm lost a controversial decision to Germaine de Randamie, failing her bid to become the UFC’s first ever female featherweight champion as a result. With this loss, Holm fell onto a three-fight losing streak, as she has was defeated by Miesha Tate and Valentina Shevchenko in her two next most recent bouts.

On this unfortunate skid, Holm will undoubtedly have to do some self reflection. A fourth consecutive loss, after all, could be disastrous for her career, and might even result in her release from the UFC.

During a recent interview with TMZ, UFC welterweight champion Tyron Woodley weighed in on the state of Holm’s career, and said the former bantamweight queen might be wise to take some time off – just like Ronda Rousey and Paige VanZant have in the past.

“I never want to give the pink slip to any fighter too soon,” Woodley said. “That’s a decision they want to make and they need to make themselves. I think maybe she needs to take some time away, maybe do something outside the octagon, hopefully something that builds her brand to make her more valuable inside the octagon. Just take a page out of Ronda’s book.”

“I would love to see her do something definitely in the entertainment category. I don’t know if they’re too quick to throw another UFC fight on Dancing With The Stars like they did with Paige VanZant but there are so many different things going on. Mixed martial arts is so popular – it might be the most popular sport in the U.S. right now – so I’ve got to believe that someone will be looking to have a little spin off with a mixed martial arts competitor.”

Woodley then suggested Holm could take a page out of his book and moonlight as a UFC commentator for Fox Sports.

“One thing I have not seen her do a lot of – and maybe she just doesn’t have any interest – maybe some commentating. For me, it always kept me fresh. You always have the control to reach so many hundreds of thousands of millions of people on a platform. So when I wasn’t even competing for eight months I kept my name in the mix, I kept my stance for why I should be next for the title and it held more weight than what people realized. So maybe she should consult with the FOX people and try to do an audition to maybe do commentating.”

Do you think Holly Holm has the chops for commentating? Sound off, PENN Nation!