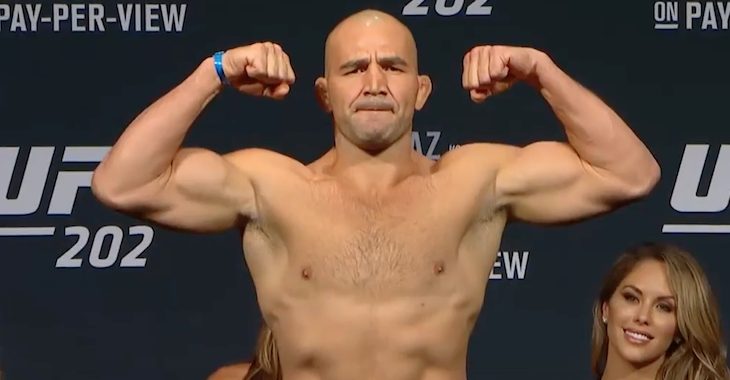 Late last month, reports surfaced that Glover Teixeira and Jimi Manuwa were being considered for a light heavyweight showdown at UFC 208 in Anaheim, California. Unfortunately, that card was cancelled altogether, which meant that UFC 209 – scheduled for February 11 in Brooklyn – became the new UFC 208.

With the cancellation of the originally scheduled UFC 208, Teixeira and Manuwa’s planned bout was also scrapped. While reports quickly began to suggest that Manuwa would be rescheduled for a March 18 card in his native England, it was not known when or where Teixeira would make his next steps into the Octagon.

That is no longer the case.

According to a report from Ariel Helwani of MMAFighting.com, Teixeira will return at the new UFC 208 in Brooklyn. His planned opponent for this card is a bit of a shocker.

As a long-time member of the light heavyweight top-10, one would expect Teixeira to be matched up with another top-10 fighter. Instead, however, he’ll apparently be mixing it up with rising prospect Jared Cannonier. Cannonier, to remind, debuted in the UFC as a heavyweight, where he was first knocked out by Shawn Jordan, and then rebounded with a knockout win over Cyril Asker. In the wake of this defeat of Asker, Cannonier elected to drop to light heavyweight, where he recently earned a competitive decision victory over fellow prospect Ion Cutelaba. His reward for this win will apparently be a fight with Teixeira – though it’s hard to say if a fight with Teixeira can really be called a reward.

Though Teixeira was knocked silly by Anthony “Rumble” Johnson in his last fight, he has long stood out as one of the light heavyweight division’s most fearsome contenders. Over the course of his time with the UFC, he has scored emphatic defeats over Kyle Kingsbury, Fabio Maldonado, Quinton “Rampage” Jackson, James Te Huna, Ryan Bader, Ovince St. Preux, Patrick Cummins and Rashad Evans. Of those men, only Rampage survived to the final bell. Needless to say, Teixeira is an incredibly dangerous fighter, and as such, a massive test for the rising Cannonier.

What do you think of this reported matchup? Will it be too much, too soon for Cannonier, or can he spring the upset? Sound off, PENN Nation!