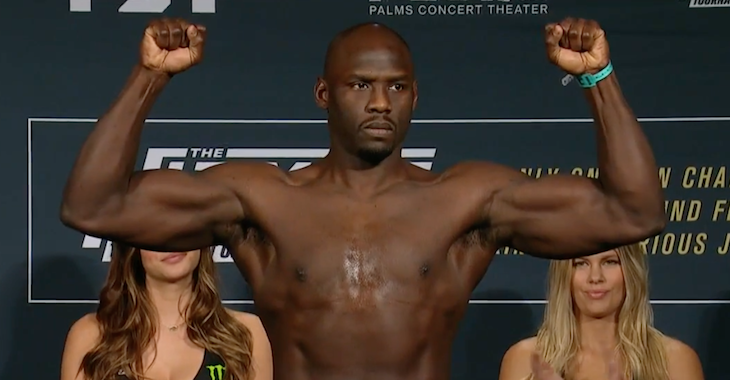 Round one begins and Cannonier lands a hard leg kick to start. Ion charges forward with a combination. Jared circles out and lands a jab. He follows that up with a right over the top. Ion lands a right hook and then a knee to the body. Cannonier lands a nice right hand. Ion with a left hand and then a knee. Cannonier presses him against the fence and lands a foot stomp. Knees inside from Jared. Ion scores a trip takedown and winds up in full guard. He postures up and lands a right hand. Jared looks for a sweep attempt but Ion is not having it. He moves to half guard and lands another big shot. Cannonier scores a sweep and gets back to his feet. Ion with a nice leg kick inside. He lands a right hand and then a knee to body. Ion grabs a hold of Jared and tosses him to the floor. Jared gets back up but eats a partial head kick for his troubles. Round one comes to an end.

Round two begins and Ion lands a right hand but Jared counters with a crisp left. Ion misses with a big hook. He shoots in ands scores a takedown. Cannonier tries to get back to his feet but eats some big shots while doing so. The fighters break and Jared lands some big shots. He connects with a huge right and Ion shoots in desperation and scores a takedown. Cutelaba works some short shots but Jared scrambles and gets back up to his feet. Cannonier decides to clinch and pushes Ion against the cage. He scores a takedown and begins working from full guard. Nice shots from Jared here. He works in some elbows. Round two comes to an end.

Round three begins and Ion lands a leg kick to start. Jared with a nice jab. Ion misses with a spinning back fist. Cannonier lands a solid body kick. And another. He circles out and lands another good kick. Ion shoots in and scores a takedown. Jared pops right back up however and lands a huge right hand. Ion charges forward with a right hand of his own. He lands a pair of leg kicks. Jared scores with a jab and then with a right. The fighters clinch. They break and Jared lands another nice right hand. Ion misses with a right hand and eats a left from Cannonier. Jared lands a high kick but then eats a jab. Two minutes to go. Cannonier lands a huge right and then another. Ion is hurt and busted up. Another right from Jared. Ion shoots in for a takedown. Jared defends. They clinch. Jared with a knee inside. They break and Cannonier drops his hands and taunts Ion. He lands a right and then a left. The horn sounds to end the contest.