Earlier this month, undefeated kickboxing veteran Geramaine de Randamie stepped into the Octagon with former UFC bantamweight champion Holly Holm for a highly anticipated showdown for the inaugural women’s featherweight title in the main event of UFC 208. De Randamie won the fight via unanimous decision, claiming the UFC women’s featherweight championship after out-striking the former champ throughout the course of 5 rounds. Unfortunately, the fight was filled with a bit of controversy as de Randamie landed punches after the bell on two separate occasions. 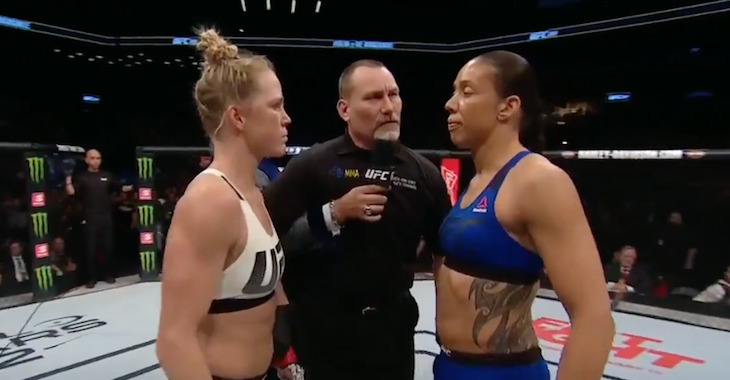 As a result, the newly crowned champion released a statement on social media offering Holm a rematch as a result of the controversial blows, saying:

“I want to say that it was a heated battle with lots of emotion but I AM NOT a dirty fighter. I have always trained to fight to the end or until there referee steps in. Never did I punch around or over the referee to deliver a cheap shot on Holly. I have nothing but respect for Holly and the UFC, and because of that I want to say right now that I think I owe it to the Holly and the fans to do this fight again to make sure that the winner of this historic belt is crystal clear. Holly let’s do this again. Much respect osss.”

This led to criticism that de Randamie was potentially ducking Cris Cyborg, who had been cleared of her potential USADA anti-doping violation.

Now, the champ has addressed the claims in a recent appearance on The MMA Hour, explaining why she is not ducking a Cris Cyborg fight. 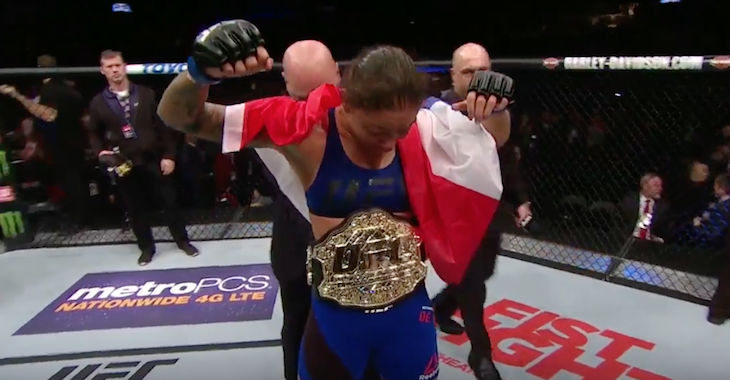 “I’ve said I need surgery on my hand, that’s inevitable,” said de Randamie. “But I never said I need surgery right now. Am I going to have permanent damage if I fight again? That is something I have to evaluate with my doctor. I truly apologize for not making that clear, but I don’t run away from anybody.”

“I knew Cyborg was there and there is no reason for me to run, everyone is beatable and it is an honor for me to fight such a great champion like Cyborg. I am not running. But at this point, I do believe Holly deserves the rematch.”

“I completely understand people want to see that fight, and that fight will eventually happen, but first I got to fight Holly to clear everything up. Everything that has been said, I think she deserves the rematch, first. A few weeks ago, it wasn’t clear if Cyborg would be cleared to fight soon, now that she’s cleared, if the fight is going to happen, it will happen anyway, but Holly deserves it first to settle things up.”