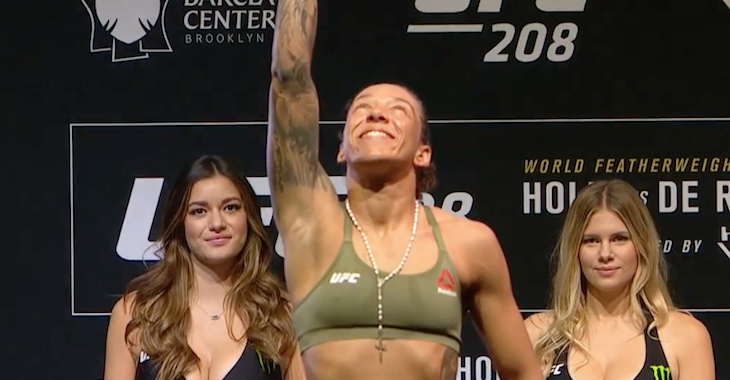 The UFC’s inaugural women’s featherweight champion Germaine de Randamie has been stripped of her title for refusing to fight the division’s number one contender, Cris “Cyborg” Justino. Cyborg will now fight Invicta champ Megan Anderson for the vacant featherweight title in the co-main event of UFC 214 this July 29.

In the wake of this development, De Randamie has taken to social media with a quick statement. This statement was automatically translated from the original Dutch, so some segments seem to have been lost in translation, but the message remains quite clear.

“As many of you know by now, the UFC has stripped me of the [title]. For those of us who don’t quite know what that means; the UFC has took my title because I refuse to fight against their number 1 contender (I have my reasons). It remains special for this news from the media to learn and I regret that it happened this way, but it is what it is!”

Well I hear you already think ‘she’s scared! What a bad champion! A disgrace to the sport! They don’t deserve to be a champion!’ etc.,etc.. I see it all over. But regardless of what everyone thinks [and] does, I walk my own path. And you can agree or not.”

Gutted that I’m absolutely not, means that I quit. This means only that I have more reasons to fight even harder sometimes (literally) for which I am and what I want. The UFC is far away from me!! It’s easy to stand with the crowd. It takes courage to stand alone.”

Germaine De Randamie won the inaugural women’s featherweight title when she defeated Holly Holm with a controversial decision. Do you think the UFC made the right choice in stripping her of the title?