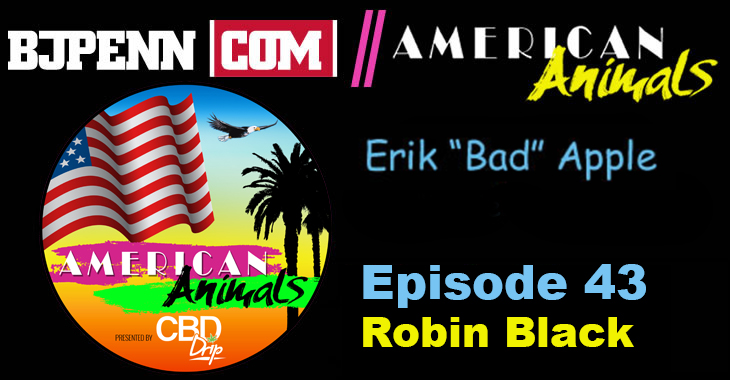 Robin Black is here to talk Mayweather vs. McGregor and more with the American Animals.

On this episode of American Animals, Erik Apple and TJ De Santis are here and ready to bring you the biggest and the best in the world of MMA. The Animals are joined by a man who is well known to MMA fans as the former glam rock singer and former Fight Network fight analyst, Robin Black. Black has always been known for his mastery of bringing depth and passion to his analysis and the ability to get to the heart of every fight.

Today, our trio discusses the shocking announcement by Mayweather Promotions and the UFC of the finalized date (Aug. 26) for a boxing match between legendary boxing champion Floyd Mayweather Jr., and UFC Lightweight Champion, Conor McGregor. Mayweather (49-0, 26 KO) will be stepping into the boxing ring after nearly two years of off-time, while McGregor will be entering a boxing ring for his very first professional fight. Very few in the world of combat sports were prepared for a deal to be done so soon, and even less expected to see this crossover fight land in the ring in merely two months. One thing is for sure, Mayweather and McGregor have the entire world talking about this monumental matchup and we can only hope this fight is worth the price of admission.

Also, the guys review UFC Fight Night 110, where fans saw heavyweight Mark Hunt travel to Auckland, New Zealand to stop Derrick Lewis with a 4th round TKO, and middleweight Derek Brunson land a 1st round KO victory over Dan Kelly. Plus, we learn about some potential upcoming matchups in the world of Bellator.

Please welcome Robin Black to this episode of American Animals!