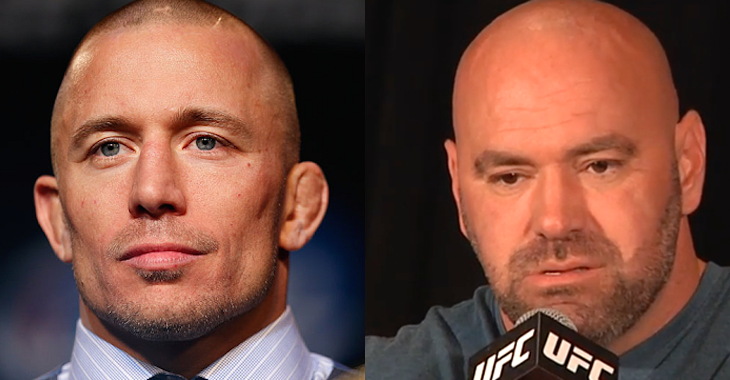 This week, news surfaced that the UFC and former UFC welterweight kingpin Georges St-Pierre had finally reached an agreement on the terms of a new multi-fight contract which was in the process of being finalized. That was then followed up by a statement from UFC President Dana White, in which he revealed that St-Pierre was officially back in the UFC. “He’s back. I’m excited,” White said. “We worked at it for a long time and finally got it done.”

“It could be the winner [of the March 4 welterweight title fight] between Tyron Woodley and Stephen ‘Wonderboy’ Thompson, or it could be [middleweight champion] Michael Bisping,” White said. “Georges has also talked about fighting at 155 pounds [lightweight]. He says he can make the weight.
“But I have no idea when he’s going to fight right now. We don’t have anything booked and literally haven’t talked to anybody about it.”

While it certainly appeared as though fight fans would have a GSP return fight on their hands, the welterweight icon revealed in an interview with The Canadian Press that nothing has been made official:

“Nothing official yet. No opponent, no date.”

St-Pierre could very simple mean that nothing is official in regards to who he is fighting, and when he will do so, however he very well could be shedding light on the fact that he has not officially signed the contract which he reportedly agreed on the terms of.

Stay tuned for updates on this potentially interesting situation as they continue to emerge.