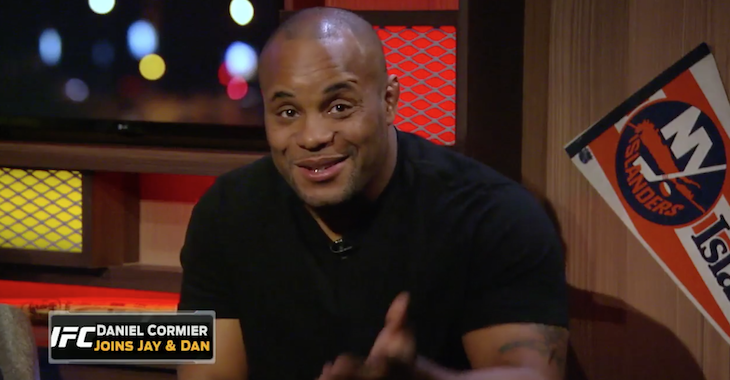 UFC light heavyweight champion Daniel Cormier pulled one of the most savage moves in recent memory when he decided to make UFC fight heavyweight #1 contender Anthony Johnson stand during an interview because there was only one seat available.

Cormier, who will be having his highly anticipated rematch with Johnson at UFC 210 on April 8th in New York, took to social media to post the moment:

During our last interview I decided @anthony_rumble didn't get a chair. He needed to stand. I'm the champ I make the rules lol. @ufc 210 tickets going fast get em now. #buffalo #andstill

Cormier and Rumble squared off once before, at UFC 187, where they fought for the vacant UFC light heavyweight championship after Jon Jones was pulled from his scheduled scrap with Anthony Johnson due to his infamous hit-and-run incident that saw him suspended and stripped of the title.

In that fight, Cormier secured a 3rd round submission win over Johnson as he not only bounced back from his UFC 182 unanimous decision loss to Jon Jones, but also secured the UFC light heavyweight championship. Since then, Cormier has defended the belt once, defeating Alexander Gustafsson via split decision at UFC 192 before having his second title defense turned into a non-title fight with Anderson Silva at UFC 200 after Silva stepped in on 48 hours notice for Jon Jones, who was pulled for a potential USADA anti-doping violation. Johnson on the other hand has been on a tear since dropping the UFC 187 loss to Cormier, going on a 3-fight win streak that saw him KO Jimi Manuwa, Ryan Bader, and Glover Teixeira before ultimately earning a rematch with Cormier, which was postponed after Cormier tore an adductor in his groin.