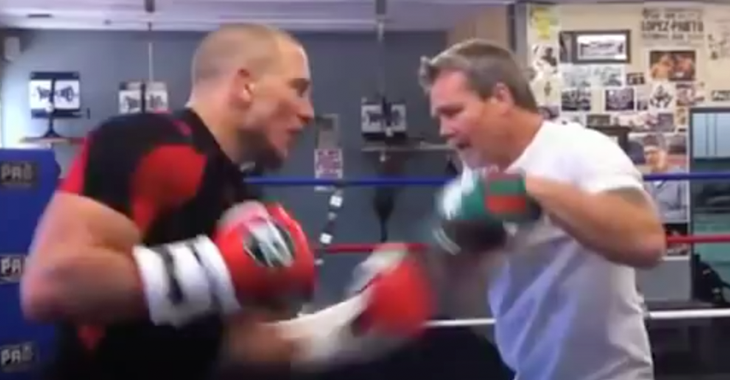 Fans were ecstatic to hear that Georges St-Pierre and the UFC have finally reached an agreement for St-Pierre to fight again in the Octagon.

Famed boxing trainer Freddie Roach and St-Pierre’s CAA agent, Nick Khan, arranged the deal with UFC President Dana White and now the world is waiting to hear who St-Pierre will fight in his return.

Roach was a guest on Monday’s episode of The MMA Hour and told Ariel Helwani that he feels St-Pierre is ready to jump straight back in against the best competitors in the UFC.

“If Georges had like a couple easy fights first to get back where he was, I don’t believe in that,” Roach said. “I think he’s a hundred percent ready to fight again. We’ll make sure he is in great shape for the fight and everything is just formality. But, the thing is, he does need to ease his way back into it. He knows what he’s up for. He knows these opponents and I know these opponents also. The thing is, the UFC is a very tough sport but the thing is we didn’t want to come back just to come back. We wanted to come back to be world champion. We want to be the best.”

Helwani then asked on the timeline of St-Pierre’s actual fight as he was hearing the third or fourth quater of the year, which Roach said he was expecting also. “Yes and it’s getting hectic with my schedule with Pacquiao and Cotto but nothing solid yet,” Road said. “The thing is, once we make that deal and once we start training with Georges, I will be in training camp 90 percent of the time for sure.”

Roach also stated that he will be cornering GSP for his return fight as well.

“It will be my first UFC fight,” Road said of his plans to corner St-Pierre.

Who do you want to see Georges St-Pierre take on in the Octagon in his return? Sound off in the comment section!