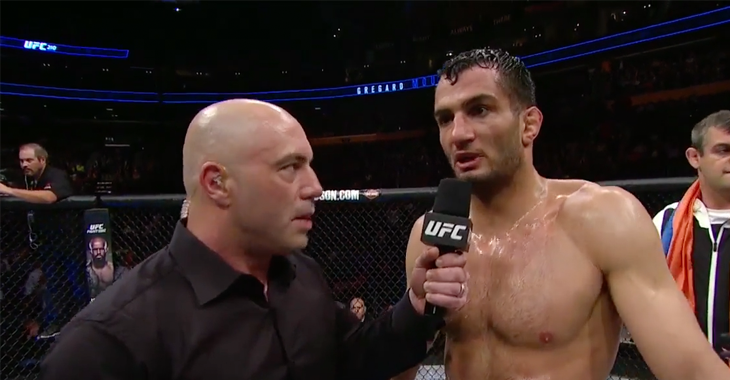 Slowly but surely, Bellator has been gathering huge talent from the UFC. It started as just a couple here and there, but Roy Nelson marks the 16th former UFC fighter that Bellator has gathered for its roster. One of the most unexpected fighters to jump ship was Gegard Mousasi. He was on a five-fight win streak, with his most recent victory being against Chris Weidman. Controversy or not, that was a huge win. Yet, here he is about to make his Bellator debut on October 20th. Recently, he opened up about some criticisms that led to his decision.

“I was a small fish in the UFC. I’m a big fish in Bellator. That’s why I want to do my part to grow with Bellator. There’s a connection that I don’t have with UFC. It’s a company, like a factory. With Bellator, it’s more that I’m part of the family, and I’m doing the best I can to grow with the family. If I was to criticize [the UFC], I think the fairness of payment or the fairness of getting a title shot, it’s too much about the name of the fighter and who they feel they can build as a star as opposed to who is the best fighter.”

“There are issues. Before the belt I’d have to fight probably Luke Rockhold, I would have fought Yoel Romero because [Robert] Whittaker is next. It would have made my road so difficult to get to the top. Some get an easy road. They give the fighters they like match-ups suited for them so they can keep winning. They’ll probably do Conor McGregor vs. Nate Diaz 3. Why? Because McGregor has a good shot of winning. They’re not going to make a fight with Khabib [Nurmagomedov] or Tony [Ferguson] because it’s bad for the promotion. Those things, you feel as a fighter. I’m not making things up. It’s frustrating. I had to take the hard road. That’s what I feel.”— Gegard Mousasi speaking to Mike Bohn at MMA Junkie.

Regardless if you take Gegard Mousasi’s word for it, you can’t deny the logjam that is still going on in the UFC’s middleweight division. Michael Bisping is defending his title against Georges St-Pierre, while interim champ Robert Whittaker waiting to see what pans out. Mousasi will be in the main event against Alexander Shlemenko at Bellator 185, with a win most likely resulting in a Bellator title shot himself. This could potentially set up a superfight between another former UFC fighter Rory MacDonald.