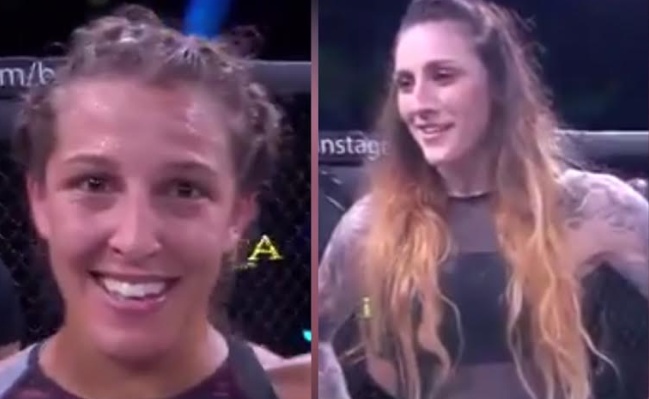 Another fun night for Invicta FC is in the books. And throughout all the action, we may have seen a UFC bout set up in the process.

In the evening’s co-main event, the 145-pound weight class was put on display as top prospects Felicia Spencer and Ukraine’s Helena Kolesnyk went to battle.

It was Spencer who would keep her unbeaten streak alive as she extended it to 5-0 and continued to prove how legit of a prospect she is with a second-round submission victory.

It’s no secret that the UFC is desperately in need of featherweights to fill their unbelievably barren roster. Which is why it came as a surprise that the talented Spencer didn’t try out for The Ultimate Fighter season 28 which will be featuring her division.

But in the end, it looks like things may have worked out regardless.

In Spencer’s post-fight interview with Laura Sanko, she would take a jab at someone she has a slight history with, the last Invicta 145-pound champion and current UFC fighter, Megan Anderson.

“I’ll take anything. I know a lot of fans wanna see a featherweight champion in Invicta, I know Pam [Sorenson]’s looking for a fight. I know Megan Anderson talks a big game and I’m happy to try and finish what Holly [Holm] couldn’t.

So anything, anything that comes. I’m ready for it.”

Perfectly enough, the Australian turned Kansas City, Missouri resident, Anderson was attending the event and entered the cage to give a quick response.

“As you said there’s a lot going on in the division. it’s really hard cause we aren’t in the same promotion,” Anderson responded, “But if the UFC want a fighter, I’ll gladly welcome [Spencer] to Australia. Let’s go, UFC Adelaide! Let’s f*ckin’ go.

I can assure you she don’t want these hands.”

December 1st will be the UFC’s return to Adelaide and Anderson is certainly in need of any featherweight possible to try and rebound against after her UFC 225 encounter with Holly Holm.