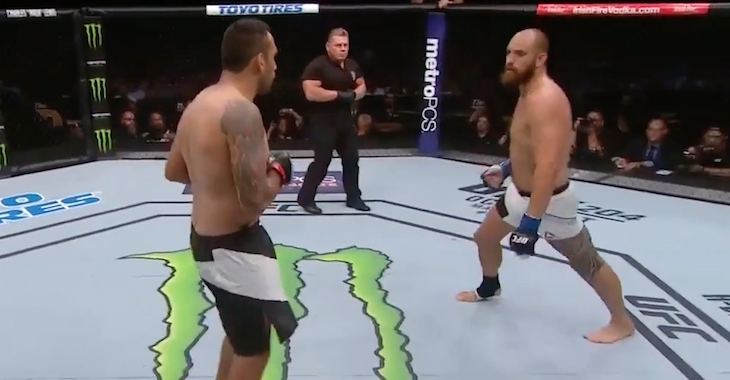 UFC 203, which emanated from Cleveland, Ohio’s Quicken Loans Arena, produced a number of strange moments. The majority of these moments were shoehorned into the evening’s co-main event, during which former heavyweight champion Fabricio Werdum took a unanimous decision from Hawaii’s Travis Browne, who stepped up on short notice to replace an injured Ben Rothwell.

One of this fight’s many bizarre moments occurred in the first round. After beginning the affair by clocking Browne with a wild, flying side-kick to the face, Werdum appeared to hurt the Hawaiian’s finger with a punch. Browne then retreated toward the cage, clutching his finger in discomfort and gesturing to referee Gary Copeland for a break in the action. In the confusion of the moment, the towering heavyweight was given the break he desired, though many onlookers suggested the bout should have been stopped right there.

John McCarthy, who is one of the most respected refs in the game, later took to Twitter to give his take on Browne’s bizarre timeout, and help fans make sense of the incident.

According to the veteran ref, there should have been no break in the action, and Browne’s request for one should have ended the fight. This would have meant a first-round TKO win for Werdum.

It's wrong, he cannot do that. The fight should have been called #AskBJM https://t.co/rvnHUSSwdc

Yes it was totally wrong & the fight should have been called right then #AskBJM https://t.co/OYeQ8vyC7Z

Despite this controversy, however, McCarthy explained that because Werdum won the fight, the result of the fight will probably not be changed from a decision to a TKO.

No, since Werdum won, the decision victory will stand #AskBJM https://t.co/rZ2kPNzRbw

Finally, McCarthy also took a moment defend Gary Copeland, assuring that he is a competent ref and that he simply made a mistake.

Gary Copeland was not the referee in the Matt Mitrione fight. He is a good man. He just made a mistake #AskBJM https://t.co/Ykepit9HrX

McCarthy did add, however, that Copeland should probably be “talked to” to prevent any similar lapses in judgement from occurring in the future.

He should be talked too. There can be a suspension, but there won't be #AskBJM https://t.co/V8cqqV67vL

With this unusual win in the books, Werdum regains his footing after a knockout loss to reigning champion Stipe Miocic earlier this year.

Do you think Browne’s retreat should have resulted in a first-round TKO for Werdum? Sound off, PENN nation!