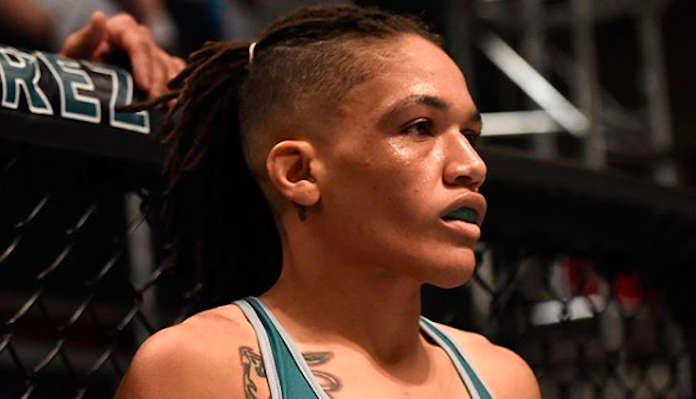 Sijara Eubanks had a whirlwind 10 days back in the fall. Initially, it was announced that she would headline UFC 230 in Madison Square Garden and fight for the vacant flyweight title against Valentina Shevchenko. However, that plan did not come to fruition, and Eubanks was later booked for an undercard rematch with Roxanne Modafferi instead.

Now, Sijara Eubanks is getting ready for another rematch, this time at bantamweight against Aspen Ladd. Eubanks lost her first fight against Ladd by decision.

“It is pretty cool. The rematch against Modafferi was different because I already won the first one so I had to remain diligent in the camp,” Eubanks said to BJPENN.com. “Sometimes you fight someone and beat them then fighters tend to slack on the preparation. Rematching Aspen Ladd I lost the first one so it is just extra fuel. I have to do things differently. I’m in a new camp, new team so working even harder than before and focusing on the game plan. I’m excited to get this one back.”

Not only is this a rematch for the 34-year-old, but she is also back up to the bantamweight division. For Eubanks, the decision to move back up to 135 pounds was an easy one.

“The decision was based on what I wanted to do for my health and my career,” she explained. “I was close to that title shot in the UFC at 125 and that is my goal. My goal is to be champion and flyweight was a route to get there. The cut was making my health pretty bad. It was making me miserable in camp. I wasn’t having fun in there. I wanted to go back to having fun and enjoying my training and the best way to do that is at bantamweight.”

When Eubanks told the UFC she was moving up to bantamweight, she added that she wanted to fight a ranked opponent. After all, she was ranked in the flyweight division. When she got the fight contract she was ecstatic to see Ladd’s name on it, as Ladd is ranked sixth in the division and Eubanks has a loss to her on her record.

“I wanted a top-10 fight coming back up to bantamweight. I stayed in the rankings in my entire time at flyweight. So, I wanted someone ranked high,” she said. “I didn’t want to have to start from the bottom of the ladder. When Aspen’s name came up it was perfect. A chance to get that win back. She was my last fight at bantamweight. She’s ranked top-10. That loss felt so long ago. I have been on a long journey since my last fight. It doesn’t feel like a rematch. She is on a streak that she is on and ranked it is perfect for me.”

Sijara Eubanks showed on The Ultimate Fighter that she has knockout power at flyweight. But, she believes she will have even more power at bantamweight as she no longer has to cut an extra ten pounds.

In the end, Eubanks is more than confident she will right the wrong of the 2017 fight where she lost to Ladd. She believes she has gotten much better since their first fight and believes she’ll hand Ladd her first pro loss in Rochester.

“I’m looking to win on the 18th,” Eubanks concluded. “I don’t pick rounds or how I win, I just will win. I’ll put my best foot forward and I think I can beat anybody.”

Who do you think wins the fight between Sijara Eubanks and Aspen Ladd?