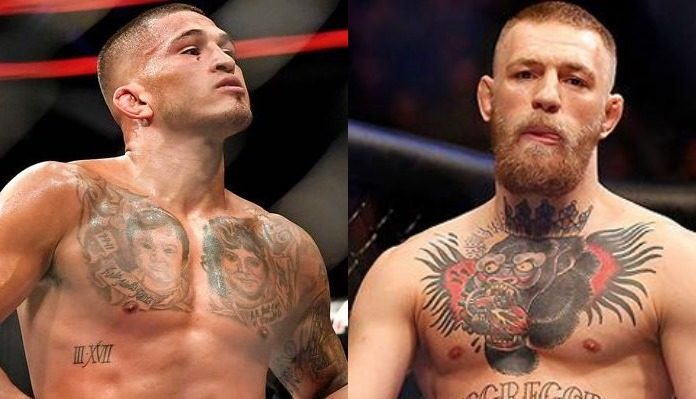 Former UFC lightweight champion Anthony Pettis is expected to return to the Octagon at UFC 241, where he’ll take on a big name in Nate Diaz. From the sounds of it, however, Pettis was first offered the chance to fight the biggest name in MMA: Conor McGregor.

Pettis dropped this bit of information on Ariel Helwani’s MMA Show on Monday.

“There were some big names thrown my way,” he said (transcript via MMA Mania). “Conor McGregor was thrown my way from Dana in August but then that didn’t happen. So I just pulled back, hung out and was training and then Nate Diaz popped up. It’s perfect.”

While Conor McGregor is one of the most sought after opponents in the UFC, Anthony Pettis says he’s happy for the opportunity to fight Nate Diaz, a man he has a personal beef with.

“Diaz, 100 percent. I just don’t like the guy,” he said. “That’s just how it is, I am not that dude, but this is just one guy I do not like,” he said, while revealing he will start his training camp as early as next week out of pure eagerness and desire to get prepared to inflict damage on Nate.

“I am going straight to work, I can’t wait to hurt this guy. This is personal fight for me, I am going to work right away. No weight cut, simply training for a fight.”

Anthony Pettis also provided some info on the history of his beef with Nate Diaz.

“It’s a perfect fight for me. You know me and Nate, we have had beef and drama for a long time, so this is something that was supposed to happen a long time ago and it’s finally happening,” he explained.

“I don’t even remember where it started, what event. I was the champion, but we have always had drama. And every time we saw each other it’s like something was going to happen,” he added. “It was just one of those things that he may have been jealous that I was the champ, he wanted a shot at me.”

Do you think Anthony Pettis can take out Nate Diaz at UFC 241 this summer?