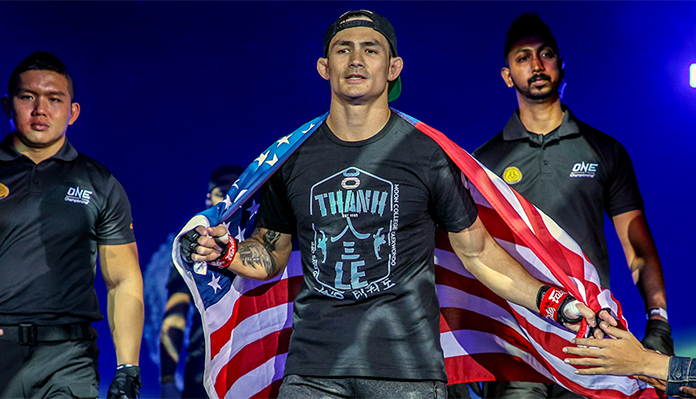 Thanh Le isn’t taking ONE featherweight champion Martin Nguyen lightly, but knows what he needs to do to usurp the division’s throne.

Le will challenge Nguyen, one of ONE Championship’s most dominant titleholders, in one of four title fights on the ONE: Inside the Matrix bill on October 30. As the fight draws ever closer, the Vietnamese-American is confident that he has the skills to swipe the belt from Nguyen’s waist.

“What I bring to the table is not much of a secret,” Thanh Le told BJPENN.com last week. “I like to move a lot in the cage. I like to hit and not get hit, and the big thing with me is, if I do get to hit you, sometimes all I need to do is touch you once.

“Hopefully we can make it complicated, make it difficult, and finally find his face with one of my hands.”

While Le casts the shadow of a very confident fighter, he is not taking the task at hand lightly. Nguyen has shown himself to be one of the most venomous and opportunistic finishers on the entire ONE Championship roster, and Le recognizes that, as he hunts for the champion’s chin, he must also protect his own.

“He’s been a champion for a long time,” he added. “He’s beat most of the guys in the top five.”

Given the skills Le and Nguyen posses, many fans believe their fight will be the best on the ONE: Inside the Matrix card. Le is confident he and the champion can deliver on those lofty expectations.

“I don’t think we can’t [live up to expectations],” he said. “It’s really going to be really tough for one of us to make it out of that cage awake.

If Le is able to accomplish what so many others have failed to do and dethrone Nguyen, he says he’d be willing be willing to give the long-time champion an immediate rematch.

“I would definitely not be opposed to—if I do take this belt from Martin—giving him a rematch,” Le said. “It’d be really cool to fight him, make adjustments, and beat him again.”

Beyond a potential rematch with Nguyen, Le sees a number of compelling matchups down the line, including a future title defense opposite grappling specialist Garry Tonon who, after winning his first five mixed martial arts contest, holds the No. 5 spot in the ONE featherweight rankings.

“I’d like to see him match up with one of the top-five guys —maybe fight Martin, if he happens to lose—and get his way to a championship spot,” Le said of Tonon. “Whenever that time comes, I’ll be ready to fight him too.”

Le is also interested in bouts in the lightweight division, which is currently ruled by Christian Lee, down the road.

“I would definitely be open to a move to lightweight,” he said. “Christian’s an awesome champion as well, and he’s done some really cool things and beat some good guys.

“That’s definitely on the radar.”

At the end of the day, Thanh Le is motivated by a desire to fight the best opposition in the world. The best way to ensure he’s able to do that is by capturing the ONE featherweight title from Martin Nguyen on October 30.

“It’s really going to be amazing [to win the belt],” he said. “It really isn’t about the belt or having a ‘C’ next to my name as champion. It’s really about fighting the best guys on the planet, and Martin is one of those guys. He’s obviously taken out a rack of guys, and it wakes you up in the morning and motivates you everyday to be able to fight really good guys like that.

“If I can take this belt from Martin, get that belt wrapped around my waist, it’ll show that the hard work is worth it, and I belong here and I belong at the top.”