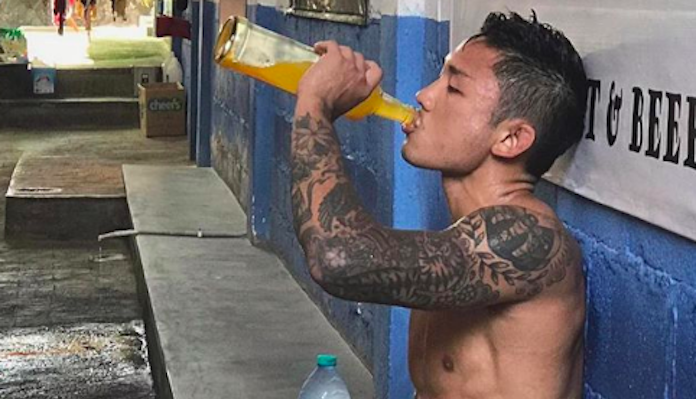 Gianni Subba was less than a day out from a fight when he received the news.

The talented ONE Championship flyweight contender was informed by the promotion’s medical team that he had an arachnoid cyst — a congenital cyst, present at birth — and was pulled from his scheduled bout as a precaution. It was the day before his birthday.

Had that bout occurred as planned, it would have been Subba’s first since a March 2018 loss to Reece McLaren. Unfortunately, his medical issues — and the great care ONE Championship is taking to ensure he’s safe — have kept him out of action since.

The good news is that Subba has now been cleared to compete by several doctors. He’s hoping that the opinions of these professionals will allow him to fight again soon.

Of course, it’s not as though he’s been sitting around doing nothing.

Subba has kept very busy in his time away from competition. He trains consistently with a number of other ONE Championship stars at Bali MMA, and has also taken on some coaching duties at this gym in paradise.

“I’ve taken on sort of an assistant coaching role,” he told BJPenn.com. “I’ve been helping out the international team, helping out with the camps.”

Working with so many top fighters has unsurprisingly kept him sharp in his time away from the ONE Championship cage.

“Bali MMA has a bunch of guys from all over the world,” he said. “We’ve got guys from ONE, Brave [CF], Abu Dhabi Warriors, so there’s always a lot of good bodies in here. These people help me get better.”

Subba also recently debuted as a cage-side commentator for ONE Championship, filling in for Michael Schiavello, who was out with an illness.

He had previously expressed interest in commentating one of the promotion’s Warrior Series or Hero Series shows, but didn’t expect the call to commentate one of its bigger shows. Nonetheless, it was an opportunity he knew he couldn’t pass up.

“When I got handed the medical suspension, I was asking for opportunities outside of competing just to make a little bit of money, and I had approached the ONE Championship staff and told them, ‘Hey, you got any opportunities for me commentating on the other shows?’

“We were going back and forth,” he continued. “They were having me send voice clips in, so I was was practicing. But what actually happened was the day of the event, Mike Schiavello got got sick and he couldn’t show up to the event and they pulled me up. They said ‘we heard you’ve been interested and we’ve got an opportunity for you to step up tonight.’

“When big opportunities like that come up, you’ve just got to just jump at them. But I was a bit nervous because I’d never done it before, especially on live TV.”

Subba’s commentary debut was particularly interesting given that his brother Keanu was fighting on the card, and unfortunately lost after a leg injury. While Subba admits he barely remembers calling his brother’s fight, he handled it very well.

Being so close to the action, as one might expect, has made Gianni Subba miss fighting immensely. He’s also disappointed he wasn’t able to compete on the organization’s next card, ONE: Masters of Destiny, which goes down in Kuala Lumpur, Malaysia on July 12.

Subba will be in KL for the card. He’s particularly excited for the main event, a kickboxing rematch between Giorgio Petrosyan and Petchmorakot Petchyindee Academy, and the co-main event, which will pit Angela Lee against Michelle Nicolini.

“I think it’s a great card,” he said. “The main event is a great main event. I don’t know if you watched the last fight, but I thought Petrosyan won. But it will be interesting to see what Petchmorakot does.

“Angela Lee’s on the card as well against Nicolini, that’s a great fight as well. Angela’s a beast.”

In the time since Gianni Subba last fought, the ONE flyweight division has levelled up significantly. The division is now buzzing with top talent such as Adriano Moraes, Geje Eustaquio, Kairat Akhmetov, Danny Kingad, and former UFC champion Demetrious “Mighty Mouse” Johnson, several of whom are competing in the ONE Flyweight World Grand Prix.

“I was supposed to be in the flyweight tournament,” he said. “I was in the promo video and everything, but then I got suspended and they put someone else in. I think it’s a great tournament. There are some great Japanese veterans in there. Danny Kingad vs. Kairat Akhmetov, that’s going to be a great fight. I don’t see Demetrious Johnson having problems with [Tatsumitsu] Wada, I think ‘DJ’ is too slick, too quick. It’s a great tournament. It kind of cements ONE as a spot for flyweights.

“I’ve been scheduled to fight both Akhmetov and Kingad before,” he added. “Akhmetov, I got hurt, and the Kingad fight, I got switched to the Reece McLaren fight at the last minute. I’ve been after them for awhile now. They’re all really talented guys, great matchups, and I would love those challenges.”

“The Korean guy that lost to Geje, he looks like a fun challenge, I think that would be a fun fight. I’m trying to fight everybody. I want to get in there and just scrap.”

As ONE Championship continues to grow, Subba is excited to rejoin the promotion’s ranks. He’s just hoping he’s cleared to return sooner rather than later.

“ONE’s always been my home,” he said. “To watch the company grow throughout the years, and for me to look at it now, it’s cool to be a part of this promotion now, and it’s an opportunity for us all to step up.

“I hope I can fight again soon.”