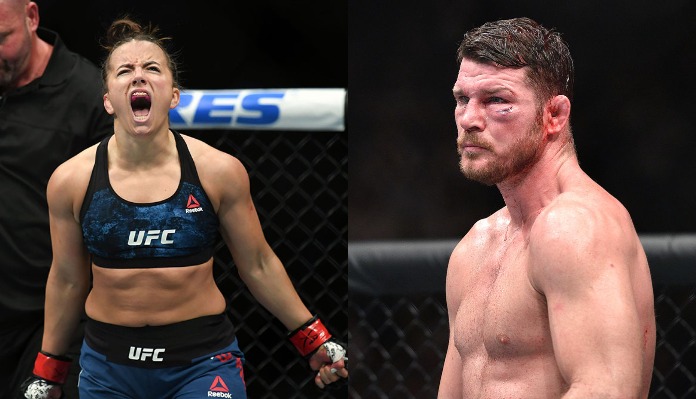 “The doctor’s just doing his f*****g job,” Bisping said on his podcast about Maycee Barber after UFC 246. “If you get an elbow in the face and it’s pouring blood everywhere, and the doctor goes ‘stop, stop, stop, I’m going to take a look at it’ — you can’t go ‘oh, he’s highlighting my cut face.’ It’s tough s**t. But you got injured in the fight and it’s his job to say ‘hold on a minute, I need to check that leg.’ Because let’s say it’s really f*****g torn and it’s bad, you can call off the fight and say she’s not fit to fight and she’s going to do herself more damage.

“He was looking out for her. I get it, Maycee Barber’s a young fighter, it’s her first loss, she’s not used to dealing with it. But, it’s not a good look. Just deal with it, accept it, you got beat fair and square by the better person on the day. Come back and get them next time. B******g about this, you’re not going to win any fans in my opinion by doing this.”

For Barber, when she heard those comments, she admits it stung. However, she does understand where Bisping is coming from and will learn from it.

“I saw it. I understand where he is coming from. But, I was not at all trying to whine about it or complain about it,” Barber said on Just Scrap Radio on BJPENN.com. “Things happen. I got injured, I lost, there has to be a winner and a loser. I’ve always looked up to Michael Bisping as a fighter and as an athlete that came before me. To me, he is a legend, so have him say what he said stung a little bit. I look up to him. At the same time, it is a kick in the butt, like stuff happens and we don’t make excuses. I’m not making any excuse and that was the truth I got hurt and Roxanne won that night.”

Maycee Barber is set to return to the Octagon at UFC 258 against Alexa Grasso.

What do you make of Maycee Barber’s response to Michael Bisping?