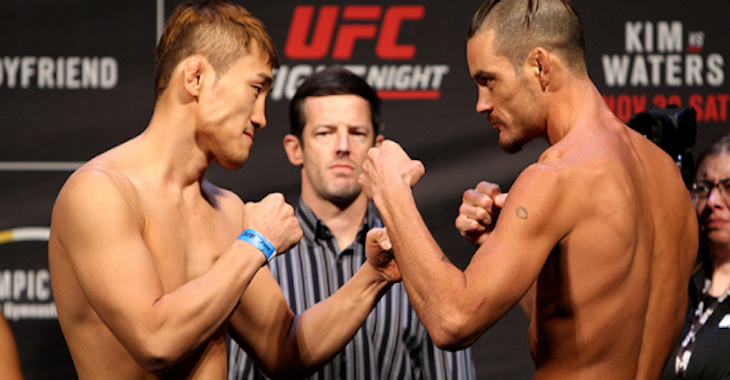 Back in November of 2015, Leo Kuntz touched down in his ancestral home of South Korea for a fight with South Korean star Tae Hyun Bang. The pair’s battle occurred on the undercard of UFC Fight Night 79.

At a glance, the fight was pretty standard, as Bang emerged the victor with a hard-fought unanimous decision. While the fight itself was not especially memorable, however, it has earned a place in the MMA history books for a rather unfortunate reason. The bout marked the first verifiable case of fight-fixing in UFC history.

This was through no fault of Kuntz or the UFC. The trouble that surrounded this fight can be traced back to Tae Hyun Bang, who apparently got involved with some shadowy Korean gangsters, referred to as “gambling brokers by the Korean National Police Agency.

These gangsters convinced Bang to throw his fight with Kuntz, paying him 100 million Won (roughly $88,000 USD) to take the fall. Bang then bet half this sum ($44,000 USD) on his opponent, while the aforementioned gambling brokers wagered close to $2 million USD on Kuntz. This caused a massive, and unprecedented shift in the fight’s betting line, as Kuntz became a huge favorite in a matter of hours. This in turn, raised serious suspicion among MMA’s discerning fans, many of who suggested a fix was the likely culprit.

But then, Bang won, which was a stark contradiction to suspicions that he planned to throw the contest. With this outcome, pretty much everyone forgot about the fight…

Today, however, this 2015 scrap became MMA’s hottest topic, as we learned that Bang had turned himself into the police, fearing for his life after he received death threats from the thugs who encouraged him to throw his fight with Kuntz. Apparently, they’re not happy he decided not to take the fall. The South Korean fighter – and one other unknown UFC fighter – are now being thoroughly investigated by the police, and have been barred from leaving Korea.

As all this chaos has been unfurling in South Korea, Kuntz has been going about his life in the United States, as he prepares to return to South Korea to participate in Road FC’s upcoming lightweight tournament.

Kuntz took time out of his training to speak to BJPenn.com’s Tom Taylor about the hectic developments stemming from his 2015 fight with Bang.

Apparently, Kuntz has been aware of this chaos since Monday, when he was contacted by a representative from Road FC.

“The lady I deal with at Road FC actually contacted me yesterday,” he said. “Apparently this is big news in Korean mainstream media.”

Kuntz then recounted the buildup to his fight with Bang, when the odds took their surprise swing in his favor. The UFC veteran explained that he, like Bang, was spoken to by the UFC brass at this time.

“Some higher-ups in the UFC actually came and talked to me while I was getting my hands taped for the fight,” he recounted. “They had said that they were talking to both of us because of how drastically the odds had swung, because of these huge bets that have been placed.”

“I’m not into sports gambling at all,” he continued, explaining that initially, he wasn’t quite clear on what was happening. “[The UFC] told me ‘hey, you know, this could possibly be something to do with betting, we don’t know, we have no idea, but it’s very out of the norm.’ That’s what they said. Like I said, I’d never been involved in any kind of sports betting, but apparently when the odds swing like that, it’s usually a sign that something going on.” Yet when Bang won the fight, Kuntz and his team adopted the assumption that the pre-fight odds-swing could be attributed to an inf0-leak; that perhaps, news of a Bang injury had slipped out, which would have caused an increase in the bets against him. This is the assumption Kuntz operated under until this week.

“[I haven’t] thought about the betting lines [since then],” he said. “Up to now, I was pretty sure it had something to do with a leak that he was hurt.”

Now that Kuntz knows the real situation, however, he says he feels sad for Bang, and for the larger Korean MMA scene.

“I think it’s really sad for [Bang], and bad for the sport in general,” he said. “There’s really nothing good you can say about it. From what I read, one of the reasons he came out to the police is because he’s scared for his life right now, because he basically blew a million or two million dollars or whatever it was. He didn’t hold up his end of the deal, which is not a good thing to do with those types of people. So I feel really bad for him, and especially for Korean MMA. I’m not sure what type of effect it’s going to have on that type of stuff.”

“It’s really bad for that whole side of things.” Finally Kuntz explained that he believes he missed a call from the Korean police during a recent training session. Given that he’ll soon be returning to the country to compete in Road FC’s lightweight tournament, he plans to cooperate to the fullest.

“I’m assuming now, after reading that he’s actually gone to the police, and that there’s an actual investigation, I’m assuming that’s who called me, it was the Korean police.”

What do you make of all the madness stemming from Leo Kuntz’s 2015 fight with Tae Hyun Bang? Sound off, PENN Nation!