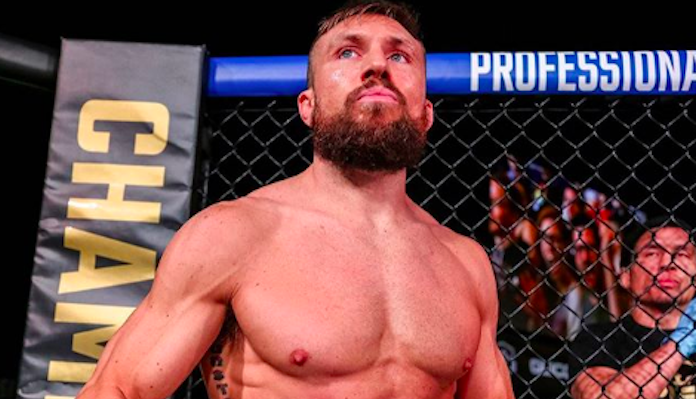 Last year, Lance Palmer took his impressive MMA career to new heights, winning the featherweight playoffs in the Professional Fighters League (PFL) and earning a gold belt and $1M prize for his efforts. This season, he’ll look to accomplish the same feat with a new team behind him.

Ahead of his first PFL bout of the season, which will pit him against Alex Gilpin this very evening, Palmer has relocated to New Jersey where he is training under renowned coach Mark Henry.

Henry, for those unfamiliar, is the man behind MMA stars like Eddie Alvarez, Frankie Edgar, Edson Barboza, Marlon Moraes and countless others. So far, Palmer has found his work with this legendary coach and his pupils incredibly fruitful. He also feels like he’s returned the favor by teaching the team some of what he knows.

“It’s been awesome,” Lance Palmer said on BJPenn.com Radio, discussing his time with this new team. “I feel like the amount that they have helped me, and the amount that I have been able to bring my game to the table here, and kind of brainstorm with each other… I can help them in certain areas, and they can help me in certain areas. It’s been great. The good thing for me is anywhere that I go I bring a good skillset to the table. So as far as I can learn I can help teach [too]. It’s kind of a give and take, and that’s how I always feel. I never go anywhere to train just to take knowledge. I always like to give knowledge where I can. I’ve always been somebody who’s wanted to help better everyone around me, because it’s only going to make me better so it’s been a good transition and I love it out here.”

With this new team behind him, Lance Palmer is ready to get this PFL season underway — starting with his Thursday night showdown with Gilpin.

Given that the PFL format awards more points to fighters who score finishes, Palmer says his priority, particularly in his first few bouts of the season, is to end his fights quickly. That being said, he doesn’t intend to force anything inside the cage.

The number-one priority for Palmer is simply winning and advancing through the perilous PFL featherweight bracket in the direction of the belt. That he, says, is even more important than the $1M prize.

“I do it for the championships and the belts and everything else,” he said. “The money is great, but I fought when I was poor, so fighting for $1M… it’s cool, but that wasn’t my reason for fighting in the tournament. I would’ve fought in the tournament regardless cause I like to be active. That was the most active I’ve been in my entire career, five fights in six months is pretty crazy for anybody.”

If you need more proof that Lance Palmer is not motivated by money, here it is: Days removed from his $1M win last season, he was back to work operating his snow removal business.

“I own a snow removal landscape company, so literally the day I got back on January 1st, we had a snow storm in Columbus, so I was back to work that very next day, making sure that company is running well. I have a partner who helps me out when I’m out of town, and we kind of piggy back each other on the business, but when I’m in town I like things to be hands on. I’m not a guy who likes to just point fingers and tell people where to go, I like to be involved, and be doing things, so you know I like to stay busy. A break is good, but a break from training and fighting doesn’t mean a break in life. I like to be busy all the time.”

While Lance Palmer isn’t overly distracted by the prospect of another $1M payday, make no mistake, he intends on pocketing the prize again this year. His road to that prize begins tonight when he takes on Gilpin.

“He’s more of a grappler,” Palmer said of his first PFL foe of the year. “So I feel like that benefits me, because I know anytime somebody wants to grapple or wrestle with me, I have the technical advantage over them in that area. But I mean he’s no slouch, he’s 12-1, he’s got some decent wins, he’s fought overseas, he’s got some experience.”

For all his opponent’s skill and experience, Lance Palmer is confident that, with the right gameplan and a world-class team behind him, he’ll kickstart the 2019 PFL season with a big win.

“I visualize going out there and putting pressure on him and overwhelming them with my pressure, and getting a finish,” the inaugural PFL featherweight champion said confidently. “Whether it’s on my feet, or whether it’s on the ground I feel like I’m better than him in every position that we get to, so I’m just looking forward to go out there and doing it.”

Catch the reigning PFL featherweight champion Lance Palmer back in action tonight, when he takes on Alex Gilpin on ESPN.