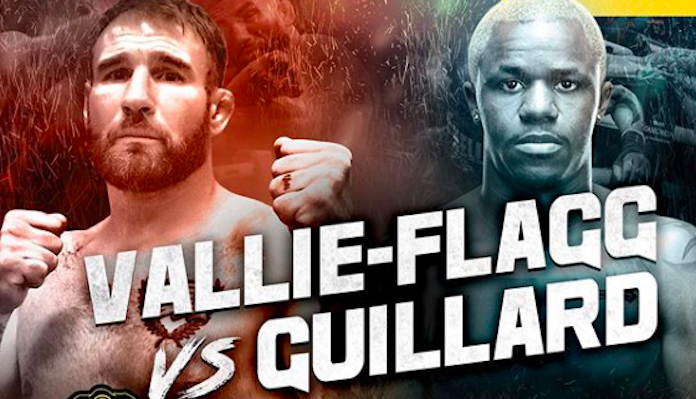 Isaac Vallie-Flagg knows Melvin Guillard very well. The two UFC veterans previously trained together at JacksonWink MMA in Albuquerque, and even lived together for a brief period. But now, they’re poised to pummel each other, sans gloves, as part of the BKFC 7 card in Biloxi, Mississippi on Saturday, August 10.

Vallie-Flagg admits there was some reluctance to agree to a fist fight with a man he considers a friend, yet he knows he and his opponent both understand that it’s purely business.

“We know each other really well,” Vallie-Flagg told BJPenn.com. “He comes to fight, and so do I. I think we’re both good at separating the business from the personal part. So, there was a tiny bit of reluctance, but we’re fighters. This is what we do.”

Fighting a teammate is always an interesting challenge, but Vallie-Flagg believes his previous sessions with Guillard are far enough removed that they’ll have very little bearing on their imminent fight.

“It’s been several years since we’ve trained together, and we’ve both grown as fighters,” he said. “So I’m expecting to see a different Melvin than the one I trained with, and I know I’ve made some improvements in my game. There’s some stuff that’s going to be familiar [from our training sessions], but all in all, we’re different fighters at this point in our careers.”

Vallie-Flagg, who is in recovery after a struggle with a addiction, is determined not to judge Guillard, and believes his former stablemate will be plenty dangerous come fight night, whether he’s distracted by the turmoil of his personal life or not.

“I know Melvin’s had some tough stuff happen,” he said. “I have too.”

“I’m not one to judge anybody, and I hope I get the best Melvin there is. I hope he’s up for a good hard fight. I’m expecting the best Melvin, and that’s what I’ve been training for.”

“One punch from Melvin can change somebody’s f**king life,” Vallie-Flagg said bluntly, reminding just how dangerous his training partner turned opponent is. “He also has more experience, bare knuckle, and I think that might be a factor for him, because it’s different, fighting without gloves.

“Watching some of his bare knuckle stuff, his style has changed a little bit because he can’t be as explosive, so there might be a little bit of a feeling out process [when we fight], whereas with gloves we could have just thrown.”

If Vallie-Flagg is able to out-fight Guillard in Biloxi, he’ll be 3-0 as a bare knuckle fighter, and well-positioned for more big fights in the BKFC ring — perhaps even a title fight. He says he’s always on the hunt for opportunities of this kind, but perhaps not for the reasons you’d expect.

As a person in recovery, Vallie-Flagg is always working to help others who are struggling with addiction, and he recognizes that bigger fights give him bigger platforms from which to accomplish his mission.

“I want to get the most exposure possible,” he said. “I want to fight for a title. I want to get the biggest fights possible. I’m somebody who I think fares well in bare knuckle fighting, and I’d like to continue on this career path, and getting bigger opponents and fighting for the title is always the goal.

“The more exposure I can get, the better,” he added, naming UFC fighter and fellow recovering addict Jared Gordon as a source of inspiration. “Seeing Jared Gordon have so much success pushing his message, I feel it’s like my mission to do the same thing at this point.”

When it comes to big-ticket fights in the BKFC ring, Isaac Vallie-Flagg has no shortage of options. The promotion has recently signed a host of notable fighters, including Artem Lobov, Jason Knight, and of course Isaac Vallie-Flagg and Melvin Guillard themselves.

While the ever-classy Vallie-Flagg is reluctant to issue callouts, he says he’d be honored to share the ring with a fighter like Jason Knight in the future. He’d also welcome a fight with Lobov.

“I hate doing the call outs, but I’d love to fight Jason Knight,” he said. “I know he’s coming off an injury, but a guy like Jason would be great. And of course I’d like to fight Artem too — really just the guys who have the names right now, and anybody else that I can.”

For Vallie-Flagg of course, all of this hinges on his looming showdown with a familiar face and a familiar set of hands. When he and Guillard enter the ring together on Saturday, he expects an entertaining fight, and is confident he’ll leave Biloxi with another victory on his resume.

“I always want to finish fights,” he said. “Melvin’s a very tough dude, but I’m going to try to push the pace on him and finish him.”

Isaac Vallie-Flagg vs. Melvin Guillard — and the rest of the BKFC 7 card — will stream for free on YouTube in the United States. Vallie-Flagg thanks the following sponsors ahead of his fight: Southwest Labs, John Thomas Jewelers, Rehab Partners, 11 Biomics, Castillo Plumbing, Genesis Plumbing of San Diego.