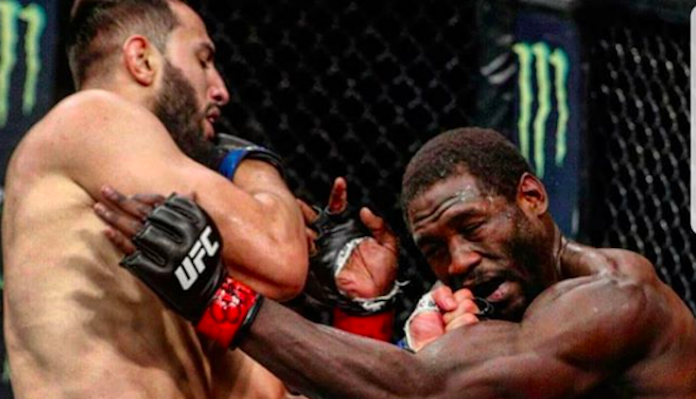 On the main card of UFC 229, which goes down on October 6 in Las Vegas, Nevada, surging UFC light heavyweight contender Dominick Reyes will take on the biggest test of his impressive career thus far as he battles former interim title challenger Ovince Saint Preux. Later on the same card, former UFC lightweight and featherweight champion Conor McGregor will make his long-awaited return to the cage as he attempts to reclaim the lightweight belt from reigning champion Khabib Nurmagomedov.

If there is one thing Conor McGregor is known for, it’s his thunderous left hand. The Irish MMA star has put countless men down with this punch, and will seek to do the same against Nurmagomedov.

Dominick Reyes is also known for his crackling left hand. And in his eyes, his left hand might be even better than McGregor’s.

Speaking on the latest episode of BJPENN.COM Radio, Dominick Reyes a unique challenge to Conor McGregor. He wants to see which of them is able to land the better left hand at UFC 229.

“I could see the man, the master do it live,” Dominick Reyes said of fighting on the same card as Conor McGregor. “I get to see Connor do it all live.”

“I’m not trying to be an extra distraction for Connor or whatever. I’m saying it out of pure respect and as a martial artist. Let’s see.”

“He’s the best southpaw striker in the game right now.”

Do you think Dominick Reyes has a left hand to rival Conor McGregor’s? Do you think he can prove that’s the case at UFC 229? Join the conversation in the comments section below.