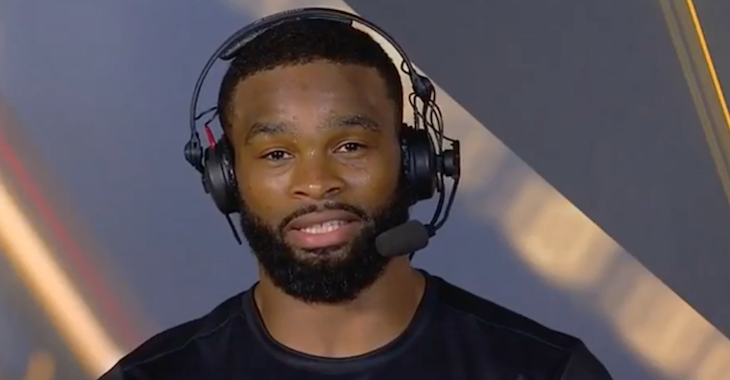 Current UFC welterweight champion Tyron Woodley will attempt to make his first title defense at next month’s UFC 205 event in New York when he squares off with top contender Stephen Thompson.

“Wonderboy” is a very unique fighter and his karate style has been able to frustrate many of his past opponents.

“The Chosen One’ spoke with Chris Taylor on BJPENN.com’s Rapid Fire segment where he discussed how he was preparing for Thompson:

“It is not so much making adjustments in my camp. It is basically just putting myself in the situation where I have those frustrations now. Have them in sparring and have them in training. This so that I can figure them out now. So I can learn the proper counters and proper defences to his offence. Once I have that figured out it will be less likely that I will become frustrated in the octagon.” Chris asked Woodley if he planned on utilizing his wrestling a lot in his fight with Thompson. Woodley replied with the following:

“I am just planning on using everything. I mean I am one of the few guys in the welterweight division that is well rounded in every aspect. I will be a black belt in jiu-jitsu pretty soon. I am a collegiate wrestler. I am one of the best strikers in the division. I believe I am one of the hardest if not the hardest punchers in the welterweight division. All those things put together with some pressure and I am the toughest match-up for Wonderboy or anyone else in the division. I do not really have a plan. I do not have something where I am going out there to outwrestle him or out-strike him. I just have got drills and techniques that will help put myself in a position where anything that comes I will have an answer for. I will just be going out there to do my thing and if he asks me a question I will give him an answer.”

Do you think that Tyron Woodley will be able to solve the riddle that is Stephen Thompson and defend his welterweight title at UFC 205 on November 12 at Madison Square Garden? Sound off PENN Nation!